Hoping to pull the comedy rabbit from their sleeves in Brixton this week are actor, presenter and funnyman Rufus Hound and musician and comic Reggie Watts.
Preview clip 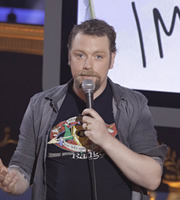 "Asking a comedian to improvise an entire stand-up set is
like asking a magician to do actual magic," says Set List
creator Troy Conrad.

Hoping to pull the comedy rabbit from their sleeves this week are actor, presenter and funnyman Rufus Hound and musician and comic Reggie Watts.

Performing at the Brixton Electric, the pair must deliver routines based on subjects presented to them on stage.

While Hound is faced with topics such as soup of the year and the problem with immortality, he also has a persistent heckler to contend with. Watts, meanwhile, uses his unique style of music to discuss an inner demon override, mixtapeworm and a misogynist serenade.

Reggie Watts gets musical, whilst Rufus Hound prepares for the show.