At the Brixton Electric, Marcel Lucont joins Russell Kane and Paul Foot to perform routines based on topics presented to them while they're on stage.
Preview clips 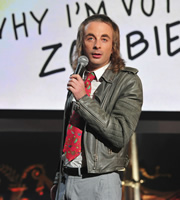 Wine in hand, French funnyman Lucont takes on subjects such as a prostitute voucher and the phrase 'I'm surprised necrophilia isn't more popular', with backstage footage showing he's pretty happy with his performance: "The crowd, they gasp. Me? In my own mind, I gasp. I say: how can something so wonderful be in there? But it is."

Kane isn't quite as confident as his colleague, however. "I didn't realise I had the capacity to be scared in a new way," he says before taking to the stage. The obscure topics he's faced with include a hypothetical virgin and the secret agenda of One Direction.

Closing the show, Paul Foot impresses with his improvisations about an organ exchange programme, the three pillars of Scientology and clams who think for themselves.

The 'French' stand-up Marcel explains what he does with his shoes.

Paul Foot has to talk about Scientology.