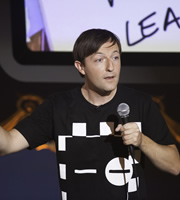 The obscure and wide-ranging topics challenging this week's comics include the secret history of ham, cosmetic heart surgery, the mile high rejection club, an enema surprise party, next year's punctuation rules and take a bigot to work day.

Backstage footage reveals the comedians' nerves before taking to the stage, and their reactions in the aftermath of their performances.

Andrew Maxwell prepares for the show.