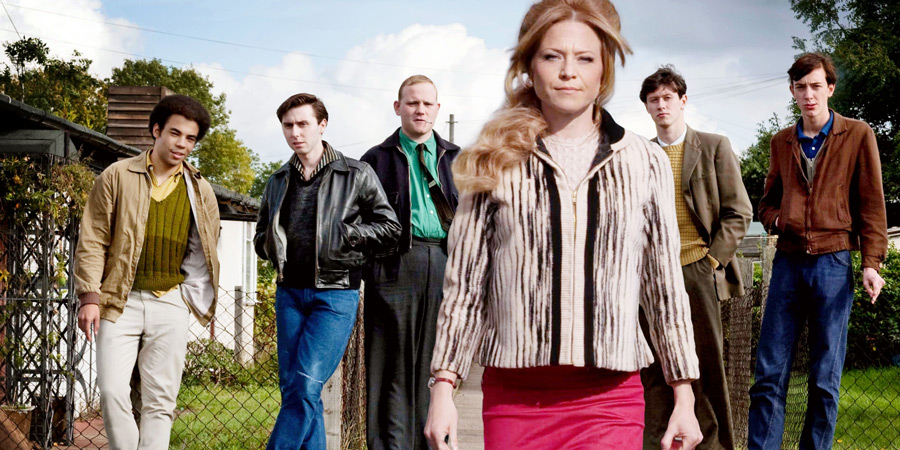 Comedy drama prequel to Only Fools & Horses. Set in Peckham in the early 1960s, Del Boy and cohorts are still teenagers, and Rodney is yet to be born

It's February 1960 in Orchard Street, Peckham, and the glamorous Joan Trotter is off to work at the Ritz Cinema, strutting down the road with her clickety-clack heels and swinging hips, drawing disdainful glances from her jealous neighbours.

Through a leafy country lane, a 1959 Jaguar Mark 9 races towards London with Freddie "The Frog" Robdal at the wheel, Gerald "Jelly" Kelly alongside.

And a young Del Boy sits with his mates Trigger, Boycie, Denzil and Jumbo Mills polishing off their half-pints of beer while Bobby Day's Rockin' Robin plays on the jukebox of the Nag's Head.

Joan Trotter is stuck in a loveless marriage to the workshy Reg, her only escape is the movies, working as an usherette at the Ritz Cinema and losing herself in the glamour of the black-and-white films on the silver screen.

Here she shares a joke with her friend Reenie and does her best to evade the "hands on" approach to uniform inspections from her manager, Mr Raynor. Outside, life is hard as she holds down two jobs to feed her family including Reg's dad, who has moved in with them.

Then Freddie arrives back in town, fresh from a stay at Her Majesty's Pleasure. He soon spots Joan and starts to befriend the family, offering Reg work as a way to ingratiate himself. But he also has big plans which need paying for... despite his best intentions to stay on the straight and narrow!

Meanwhile, Del is making use of his new friend Denzil's dockyard connections, taking care of "damaged" stock that's arrived from America. LPs, watches, clothes, and even some brand new carpet, Del can sell anything: "I guarantee you, one day I'm gonna be a millionaire," he boldly claims.

This bittersweet love story sheds new light on the lives of South London's most famous family, the Trotters.

Five Gold Rings and The Frog & The Pussycat picked up the Trotter story following the birth of baby Rodney in 1960 and follow the fortunes of the family as Del progresses to manhood in Sixties London, alongside faithful muckers, Boycie (Stephen Lloyd), Trigger (Lewis Osborne), Denzil (Ashley Gerlach) and Jumbo Mills (Lee Long).