Pompidou realises that a bowl he gave to a friend is worth £1 million pounds. We see Pompidou and Hove do everything from haggling in a charity shop to trying their hand at pottery to reclaim it.
Preview clip 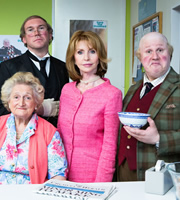 Pompidou and Marion are watching Heirloom Roadshow on TV and realise an antique Chinese bowl they gave to their friend Merrick for Christmas is worth £1million pounds. Deciding they must reclaim the bowl, Pompidou has an idea to swap the bowl with an imitation. So they head to a charity shop where a bidding war ensues and the pair end up leaving empty handed.

Pompidou and Hove are in a Chinese restaurant and Pompidou decides to pinch his soup bowl that is another near match. Surprisingly this attempt also fails and they are both ejected from the shop by an angry waitress. The two then attempt a pottery class and decide they'll make the bowl instead.

Back at the caravan, Pompidou and Hove are watching TV when they see a student from the pottery class on Heirloom Roadshow. The student is getting Pompidou's poor attempt at a bowl valued and it turns out it's likened to a piece of modern art and is estimated at £2 million pounds!

Pompidou causes problems when he tries to buy a bowl.