It's the day of the Hartmann Payne birthday bash but Midge, Nicole, Lucy and Sid aren't in a celebratory mood. 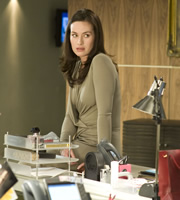 It's Hartmann Payne's birthday but Midge, Nicole, Lucy and Sid aren't in a celebratory mood. Their hunt for Grace takes them ever-closer to the truth as danger calls.

Troubled by her hidden past, Midge confides in Avi about her daughter, Talya, but is annoyed by his judgemental response. Anxious to make amends, Midge goes to Talya's house to try to speak to her adoptive mother, Esther, but unexpectedly meets the little girl herself.

Lucy, meanwhile, announces to her friends that she has split up with Bob, much to the horror of Nicole, who knows their secret affair was nothing more than a meaningless liaison. But while one relationship appears over, another seems to be blossoming with Rock and Sid's spiritual union apparently written in the stars.

In an attempt to find out more about Grace's secret life, the girls trick Robbie into getting the mysterious Jeeves to visit, but he is less than impressed to have been summoned unnecessarily. Anxious about getting into trouble with his boss, Jane, Robbie is grateful when Nicole offers to handle the awkward client. But Nicole has revenge as an ulterior motive - Jeeves is her estranged father.

Nicole attempts to bribe Jeeves into revealing the truth about Adam Hartmann and the role he played in Grace's disappearance. But the usually self-assured and confident PA is unprepared for the impact her father's home truths have on her.

Annoyed by the girls' set-up, Robbie hints that he knows some secrets about Grace's love life. But while the others sneer at the suggestion, Nicole has her doubts and sets about searching his desk for evidence.

Elsewhere, Simon bribes his client, record producer Andy Young, to listen to Midge sing and pretend she's got talent. But his plan backfires and it looks as though Simon might lose Midge forever.

In a shocking turn of events, Midge thinks she's uncovered Adam Hartmann's true identity and the PAs' futures hang in the balance when a vengeful figure from their past returns.