Will Nicole dare to give love a chance? Meanwhile Midge comes face to face with the past. 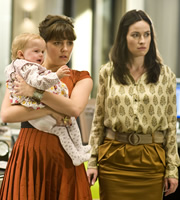 Ice maiden Nicole toys with the idea of love. The girls' search for their missing friend, Grace, leads them to a mysterious den of desire.

Nicole continues her relationship with pompous billionaire Fitz. However, her head is turned by a mystery man called Sean.

Despite being initially guarded, Nicole opens up to Sean in a way she never normally does with men. But, when Sean and Fitz ask Nicole on a date at the same time, she is faced with a dilemma. Should she finally give romance a chance or remain cynically aloof?

Euphoric after her sexual awakening - and thrilled to be free of her controlling ex-boyfriend - Sid gets carried away with the delight of having finally lost her virginity to Simon. But her uncharacteristic flirting and grinning proves unnerving for Simon, who delivers some harsh home truths.

Elsewhere, the search for Grace leads the girls to an exclusive club called Divalia - a decadent playground where every desire is catered for.

It's the first day at work for Avi Gellman, Hartmann Payne's newest Associate and Midge's first love. There's clearly a romantic spark between the high-school sweethearts but his devout religious beliefs aren't shared by Midge.