Series 1, Episode 2 - Between A Rock And A Hard Place

Will Sid go through with ripping off Hartmann Payne? With Grace still missing, a nasty surprise makes the girls fear for her safety.
Preview clips 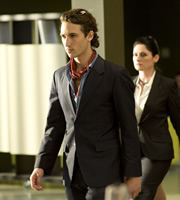 It's D-Day for Sid and Crawford's scam to defraud millions from Sid's employer, Hartmann Payne. However, Sid's new-found friendship with Midge, Lucy and Nicole casts serious doubt over whether she can see it through.

Desperate to back out of the scam, Sid is distressed after discovering controlling boyfriend Crawford's plans to frame the PAs for the crime. Despite Sid's pleas, Crawford won't listen to reason - he wants revenge on financial investor Rock Van Gelder for his mother's loss of fortune.

As Sid's unease about the scam grows, Crawford's behaviour becomes increasingly unhinged. To make matters worse, Rock recalls how terrible he felt after the financial loss - he's obviously not the monster he's been made out to be.

Meanwhile, Dominic Fitzwallace, the ninth richest man in England and Rock's newest client, makes an impression when he arrogantly strides into the offices, oozing wealth. Rude and obnoxious, Fitz meets his match in Nicole, who puts him in his place.

Initially angry, Fitz demands that Rock fire the PAs but changes his mind after Nicole agrees to meet him alone. Bored of his usual sexual conquests, Fitz offers Nicole £1m to sleep with him.

Downbeat about losing the Associate job, Lucy turns her attentions to finding Grace along with Nicole and Midge. However, she's furious and insulted when Jane tactlessly offers the job to Sid in front of everyone.

Lucy's husband, Bob, can't fight his fatal attraction to Nicole. Appalled at her actions, Nicole confides in Rachel about the fling but she has little sympathy and urges Nicole to seek a loving, monogamous relationship instead of meaningless sex. Not every man is her father, after all.

Elsewhere, Midge asks her dad to help find her daughter; Simon sets his sights on seducing the virginal Sid; and the girls uncover a nasty surprise in their quest to find Grace.