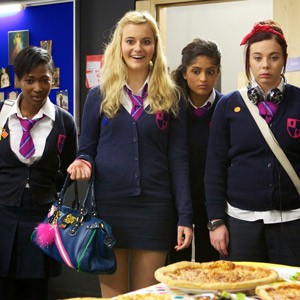 Some Girls, BBC Three's latest teen sitcom, has been recommissioned for a second series.

Made by Hat Trick Productions, the company behind comedies including Outnumbered and Have I Got News For You, the sitcom focuses on four 16 year old girls who play on their school's football team together, and live on the same inner city estate.

Producers said of the series: "We join [the girls] on their bumpy journey through adolescence taking in boys, sex, cliques, teachers, heartbreak, fun and even some football along the way."

The series was written by Bernadette Davis, co-creator and writer of mid-1990s comedy Game On, and throughout its six-episode run it attracted an average audience of around 500,000 viewers for its Tuesday evening premieres - a similar figure to the rest of the channel's comedy programming.

Widely described as an attempt at a female Inbetweeners by the press, the series attracted mixed reviews tending toward the negative, but channel bosses were evidently happy with the programme's performance across the week, and on the corporation's catch-up service, iPlayer.

Some Girls Series 2 is likely to broadcast late in 2013.

In the following clip, character Saz attempts to chat up a boy she fancies: 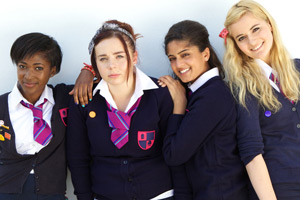