Sky Atlantic has ordered a series based on Set List, the hit live comedy format that tests the improvisational skills of stand-up comedians.

Dubbed 'stand-up without a net', the format involves comedians having to make up material on the spot rather than relying on their normal tried and tested routines which they have already honed for many months.

The live format, which was created by American Troy Conrad and exported to the UK by Paul Provenza with help from British comic Matt Kirshen, involves springing topics upon comedians with no prior warning. The second a comedian walks onto the stage, they are greeted by a never-before-seen "set list" of numerous topics, words and phrases. They must then deliver an impromptu comedy routine based on these topics.

The TV series is being described as follows: "Each Set List show will see three comics take to the stage to be presented with an unseen set list of wildly unpredictable and imaginative key phrases, crafted by fellow comedians Paul Provenza and Troy Conrad. From these they must create spontaneous, original stand-up sets under pressure and in front of a live audience. Mixing onstage performances with behind-the-scenes anxiety, reactions and recaps, Set List takes its audience through a high-energy, nerve-wracking event: the tightrope walk of comedy gigs."

The show is being recorded in the UK and America, to make a 14-part series. The British studio dates are at the Brixton Electric venue on the 4th, 5th, 10th, 11th and 12th July, with two shows recorded each evening.

The full line-up has yet to be announced, but it is known that Ross Noble, Russell Kane, Tim Minchin, Frank Skinner, Paul Foot, Richard Herring, Tony Law, Josie Long, Andrew Maxwell, Dara O'Briain and Johnny Vegas will be amongst the UK-based performers taking part. US-based comedians are also involved in the series, with superstar Robin Williams, 30 Rock's Judah Friedlander and Whose Line Is It Anyway? USA host Drew Carey amongst the transatlantic talent involved.

Sky's Naomi Gibney says: "A key part of our commissioning strategy for Sky Atlantic has been to attract the best talent to the channel, blending US and UK talent to give our customers the best content from both sides of the Atlantic. Set List really illustrates that ambition, and I can't wait to see how they live up to the challenge."

Philip Edgar-Jones, Sky's Head of Entertainment, adds: "Set List is a uniquely terrifying approach to stand-up comedy. I love it because we have no idea what we'll get. It's like a bizarre compulsion to some of the biggest names in stand-up who are addicted to the freedom it brings them to take their comedy anywhere and everywhere."

Victoria Payne, Executive Producer for the company that's making the series, Princess Productions, comments: "Set List has proven to be an innovative and thrilling live comedy hit across the globe, which challenges comedians and tests their mettle. We're very pleased to be bringing this exciting new format to Sky Atlantic HD and to be showcasing the best and bravest comedians from around the world."

Producer Barbara Romen and creators Troy Conrad and Paul Provenza add: "We're not only taking viewers backstage, we're taking them onto the stage - to feel the intense pressure, suspense, joys - and sometimes, anguish - that comedians experience as they take unimaginable creative leaps in front of a live audience. Viewers will never look at the art of stand-up the same way after seeing Set List. Audiences actually see their favourite comics' mental wheels in motion as they spontaneously create material that they might otherwise never have dreamed up. Set List is the beginning of a revolution in stand-up comedy."

Set List looks set to compliment Don't Sit In The Front Row, another stand-up format ordered by Sky Atlantic. It sees Jack Dee asking comics to make jokes based on talking to people in the audience... people the comedians' have never met before.

Aside from the TV series, the Set List format is set to return to the Just The Tonic venue at the Edinburgh Festival in August for 18 dates. Below is a video recorded to promote a previous run at the Soho Theatre, including footage of Jimmy Carr performing a routine based on 'Post Coital Crayon', Paul Foot working with the words 'Genetically Modified Casket', Phill Jupitus dealing with 'Auto Saviour' and Richard Herring getting the tricky topic of 'Biscuit Auschwitz':

This story was updated on the 28th June 2012 to include details on the guests and quotes from the executives. 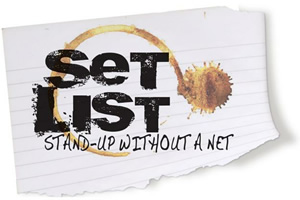