Recording on the Sky One panel show resumes next month, with celebrity guests on the film-based quiz due to be revealed soon.

First broadcast in 2019, the show is made by CPL Productions (A League Of Their Own, Rob And Romesh Vs).

More than 330,000 viewers watched the first episode of the third series in October, though this had declined to 195,000 by the sixth and final episode in December.

Promoting her appearance singing opera on Comic Relief this Friday, Jennifer Saunders told the Radio Times that There's Something About Movies is a show "which I enjoy more and more".

She also disclosed that she's shot a cameo for the third series of Ghosts.

"I've also got a little part in Ghosts, which is one of my favourite shows" she told the magazine. "It's just heaven. I'm a flashback. I play Lady Button's mother." 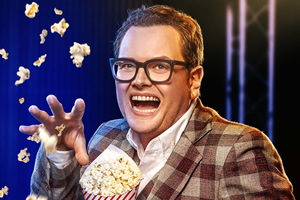