Emily Atack will present a sketch and stand-up show on ITV2 later this year.

The network confirms: "The actress, writer and TV personality will star in her own show - which is set to see her perform her relatable stand-up comedy and mischievous sketches and skits about life as a young woman. The comedian will also show off hilarious impressions of well-loved celebrities, from Gemma Collins to Holly Willoughby."

Atack rose to fame as an actor in comedies such as The Inbetweeners, with her fame increasing after appearing on the I'm A Celebrity reality series. She embarked on her first stand-up tour - Emily Atack: Talk Thirty To Me - in April and May 2019.

Six episodes of The Emily Atack Show, each 45 minutes in length, have been ordered. The pilot is expected to be broadcast as one of the programmes.

Producers say: "Each episode covers a different theme, including dating, going out, friends, family, image and adulting. Each show topic will allow Emily to not only have real fun with her comedy but also explore her own life experiences and showcase her loveable, unfiltered self."

Emily Atack says: "I am thrilled to be announcing this. I want to create and write a sketch show that gives snap shots into the weird and hilarious world of everyday life as a young (ish) person. I can guarantee whatever age you are you will relate in some way! It's a dream come true, since I was a child this is the kind of television I've wanted to make and be part of. I can't quite believe it."

Paul Mortimer from ITV comments: "Since her appearance in the I'm A Celebrity jungle a couple of years ago, Emily's star has been on the rise. We've been privileged to work with her a few times since on ITV2 and seen her unique brand of 'every-woman' comedy develop, engaging young audiences especially. Emily's name is in the title of this new show so it will therefore showcase her own fantastic range and versatility as an actress, mimic and stand-up comedy star."

The Emily Atack Show will be on ITV2 this autumn. 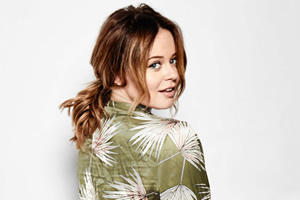