The topical comedy series has been commissioned at short notice to offer entertainment during the coronavirus lockdown.

Sky One says: "As we all stay home, Russell Howard has got his video conferencing working and is set to present a new show from his childhood bedroom."

The comedian already makes The Russell Howard Hour for the broadcaster. With that format set to return later this year, but the new series will fill the gap whilst everyone is at home.

Producers Avalon explain: "A far cry from the usual polished studio sets, the new series will see Russell giving his unique perspective on current world events, as he chats to some famous faces and interesting people in lockdown, all from his former childhood bedroom. Expect some stories that have made Russell laugh, upbeat conversations, intimate live performances and heart-warming updates from the heroes helping the country on the frontline during these unprecedented times."

Russell Howard says: "Like you I'm stuck at home going slowly mad. So, I'm doing a new show where I'll be trying to spread some joy in these strange times, chatting to some famous faces and unsung heroes. But crucially not touching ANY of them."

Sky says that Howard will be donating his fee for the series to NHS Charities Together and The Trussell Trust.

Philip Edgar-Jones, head of entertainment at Sky, comments: "We're living in the strangest and anxious of moments, in a world where we communicate with our friends and families solely via online platforms; where crossing the road to avoid people is considered polite and where we'd gladly grass up our neighbours for sitting on a park bench. So, who better to unpick the oddness with his unique take on the world than Russell Howard."

Jon Thoday from production company Avalon adds: "We are delighted that Sky have moved so quickly to choose Russell for this fast turnaround lockdown show."

Russell Howard's Home Time will air every Tuesday at 10pm and Thursday at 10.30pm on Sky One and NOW TV, starting this Thursday (9th April). A total of nine episodes have been commissioned.

He has introduced the show in this video:

The comedian has already been posting video updates on the channel during lockdown. Below is his 1st April update: 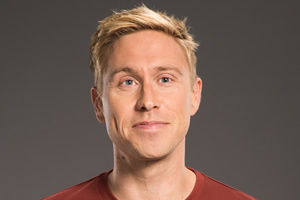