ITV2 is developing a new panel show called JudgeMENTAL, which see the teams judging people just by looking at them.

The format will be hosted by Matt Edmondson. The comedian and Radio 1 presenter has a long history with the channel, having previously hosted shows such as TV OD (pictured) and The Xtra Factor Live on the station.

A pilot episode will be recorded in front of a studio audience at the end of the month.

In the advert for tickets, the producers say: "Join Matt Edmondson for the pilot of a massive new ITV2 panel show! Think you can judge someone just by looking at them... welcome to JudgeMENTAL.

"Matt will be joined by two teams of hilarious famous faces who will battle it out to correctly identify what people do with their lives, purely by the way they look... Can you truly judge a book by its cover? Expect some amusing accusations, priceless perceptions and a lot of laughs!"

It is not yet known whether the pilot of JudgeMENTAL will be broadcast or whether it is a try-out for internal audiences only.

This pilot follows the news that Jimmy Carr is to revive Your Face Or Mine, the comedy show in which couples are forced to compare their looks with other people's. 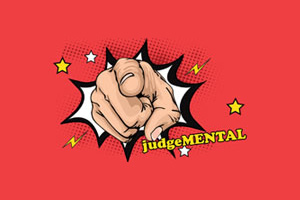