Your Face Or Mine, the couples-based 2002 to 2003 E4 comedy game show, is to return to television, with Comedy Central having ordered a "Tinder-inspired" revival.

Jimmy Carr, who co-presented the original show with June Sarpong, has been confirmed as returning to host the new show.

Comedy Central has ordered two series of the tweaked format "in which your face can win you cash", totalling 22 new episodes.

Speaking about the format, the channel explains: "Over a series of revelation-filled rounds, couples are forced to compare their looks with other people's - and ultimately with each other's - in this relationship-testing game."

Jimmy Carr says: "I'm delighted to be bringing back Your Face Or Mine to Comedy Central. In an age when people are forever judging individuals on how they look, placing attractiveness on a pedestal above intelligence, and forcing others to fit societal norms of beauty, why not make them do all of those things, to their loved ones, on national television and for money?"

Jill Offman from Comedy Central comments: "Your Face Or Mine is a great lens through which to take a not-so-serious look at our image-obsessed culture in the age of Tinder and non-stop selfies. We're delighted Jimmy has agreed to hook up with Comedy Central; we know our audience will 'super-like' his return with this classic game show format."

Leon Wilson, from production company Talkback, adds: "We're bringing this hugely popular and much loved game show bang up-to-date for the Tinder generation! It's a devilish format perfectly suited to today's swipe-right, swipe-left society, and we're delighted that Jimmy will be guiding us through it."

Your Face Or Mine will be shot in front of a live audience in early 2017 and broadcast from the Spring. 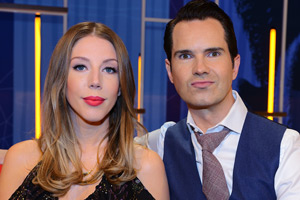 Your Face Or Mine