Keith Lemon (Leigh Francis) and Paddy McGuinness are to star in a new prime time ITV comedy series together.

The Keith And Paddy Picture Show is described as "an affectionate and humorous tribute to some of Keith and Paddy's favourite movies of all time. Each week they will attempt to recreate an iconic film, with the help of an all-star celebrity cast".

The show has grown out of a series of sketches in ITV2's The Keith Lemon Sketch Show, in which Keith and Paddy acted out various famous movie scenes.

Speaking about the new five part series, the producers explain: "Each half hour episode will be a mix of high-end film parodies and behind-the-scenes mock-doc footage following the boys as they endeavour to bring their recreations to life. What could possibly go wrong...?"

Keith Lemon says: "I'm so super excited to be working with one of my best pals, Paddy McGuinness. Paddy and I spoke about doing this years ago, and the dream is finally becoming a reality. I've stopped eating bread, to make it easier for Paddy to do 'the lift' when we recreate Dirty Dancing. I'm also excited to be eaten by a shark and be punched in't face by the Italian Stallion that is actually from Bolton. Word!"

Paddy McGuinness continues: "Keith and I have been mates for a long time. We're both self-confessed movie nuts so paying tribute to some of the most iconic movies scenes of all time is going to be a lot of fun! I've told him he'll have to play most of the female roles though - he's got long hair and it'll save us a few quid on wigs!"

Leon Wilson, from production company Talkback, comments: "Leigh Francis and Paddy McGuinness are a brilliant comic double act, and Talkback are delighted to have them both on board. Recreating well-known, iconic movies, this part scripted comedy; part moc-doc will have something in it for everyone and is a chance for Keith and Paddy to share their love of film with the Saturday night ITV audience."

The Keith And Paddy Picture Show will be written, produced and directed by Dan Johnston and Jamie Deeks, both of whom have worked on previous Keith Lemon shows.

The Keith And Paddy Picture Show will be shown on ITV in 2017. Ahead of that viewers can see Keith Lemon in the Celebrity Juice and Through The Keyhole Christmas specials.

Photos posted by Leigh Francis on his Instagram account reveal some of the movies the duo will be tackling, and that Kelly Brook is amongst the guest stars. 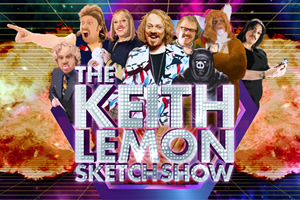