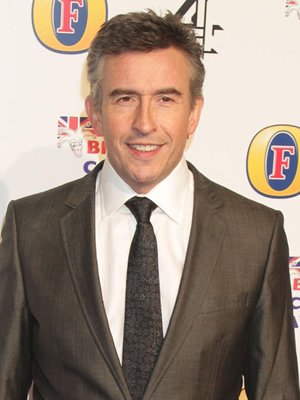 Steve Coogan, Paul Whitehouse and Will Ferrell have been revealed as the winners of the special awards at Thursday's British Comedy Awards.

Steve Coogan, who has worked on a myriad of shows and is most notable for his Alan Partridge character, will pick up the award for Outstanding Achievement tomorrow.

He said: "I can honestly say I am almost humbled by having my modest contribution to the world of comedy be pronounced 'Outstanding'. Over the last 25 years I have worked with many wonderful people and a few bastards. Of the many epithets I have received; cutting edge, acerbic, incisive, one trick pony, visionary and 'depressingly popular' (Time Out), Outstanding is perhaps the most flattering.

"Of all the accolades I have received the most gratifying is undoubtedly Best Screenplay at the Venice Film Festival and then probably this one. Although I don't pay enough attention to the comedy zeitgeist, preferring instead to watch reruns of Nazi-Hunters on the Military channel, it is never the less an honour to be recognised among my peers. I can only hope that one day my epitaph will read 'Here lies Alan Partridge AKA Steve Coogan'. God bless you all."

Meanwhile, The Fast Show and Harry & Paul star Paul Whitehouse has been announced as the winner of the The Writer's Guild of Great Britain Award for his script work.

Also attending the ceremony tomorrow to pick up a special award will be Anchorman star Will Ferrell, who will take home the International Achievement award.

Coogan, Whitehouse and Ferrell will all be present to receive their awards during the main ceremony, broadcast live on Channel 4 tomorrow (Thursday 12th December) from 9pm.

The winners of the Panel Show, Acting, Entertainment Programme, Sketch Show, Sitcom, TV Comic, Entertainment Personality, Breakthrough Artist and the public-voted King or Queen of Comedy categories will be revealed during the programme. Nominees include Lee Mack, David Mitchell and Sarah Millican.