Jeremy's career has hit an all-time low. He has now resorted to standing at a market stall dressed as a pig.
Preview clip 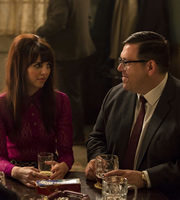 Robin thinks Jeremy's friends are holding him back and tells him that he is funny, kind-hearted and generous but is always the butt of their jokes. This leads Jeremy to look back at his life and relive not just his childhood, but the moment he was fired from his job as an accountant after being accused of skimming from the company accounts.

It was the very same afternoon he came home to find his wife Janet walking out the door with her bags packed, explaining that monogamy had crossed over into monotony and that "life isn't a ledger where everything adds up in a nice neat column. Not everything can be solved like a maths problem or a crossword puzzle. Not all couples have a baby on a timetable or check their diaries before making love."

Back to the present day and Jeremy's career has hit an all-time low. He has now resorted to working for a local butcher, standing at a market stall dressed as a pig and handing out sausage samples. As if the costume wasn't humiliating enough, he is immediately tormented by some local children. But just when he gets home and thinks he can relax, a surprise visitor knocks on his door.