Jeremy breaks out of his comfort zone by joining Robin at a trendy nightclub, but not before he's given a pair of school bullies a taste of their own medicine.
Preview clip 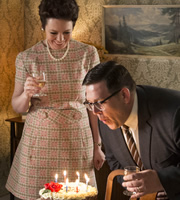 "I hope you don't end up a bitter old man, regretting your missed opportunities" is a phrase uttered more than once to Mr Sloane this week as he attempts to let go of his timid past and break out of his comfort zone.

From the outset, both he and Robin can't help but reflect on the breakdown of their previous relationships. Jeremy's wife Janet grew tired of his structured, unspontaneous routine while Robin left everything behind in San Francisco to try and make it big in the swinging London music scene, only to be cheated on by her wannabe rock star boyfriend.

Unfortunately for Jeremy, his teaching career becomes as moribund as his marriage when he attempts to stamp out some bullying by giving the miscreants a taste of their own medicine; a bold, impulsive tactic which earns him the sack. But this act of rebellion ignites within him a newfound self-assurance and when Robin takes him to a trendy nightclub, he even finds it within himself to do the unthinkable: dance.

When Robin bumps into her ex and Jeremy encounters his old school crush Nancy (who also happens to be his mate Reggie's ex-wife), the night takes an unexpectedly wild, not to mention romantic turn.

A flashback to one of Jeremy's birthdays, at which point he was still married to Janet.