As the 1960s draws to a close, good-natured yet hapless Jeremy Sloane has been sacked from his job and his wife Janet has dumped him.
Preview clip 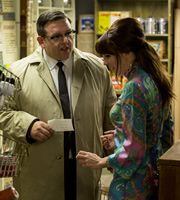 As the 1960s draws to a close, good-natured yet hapless Jeremy Sloane has been sacked from his job as an accountant and his brash best friend Ross has just been awarded the promotion he had always dreamed of. If that wasn't bad enough, his wife Janet has dumped him and a failed suicide attempt has left his house in urgent need of repair.

But with a collection of self-help tapes, a new job as a substitute teacher and a chance meeting with a pretty American woman named Robin in the local ironmonger's, Mr Sloane has a number of reasons to be optimistic about his future.

However, with a black cloud of misfortune constantly looming over his head, the newfound spring in his step may not last long, particularly as his first task is to win over his rebellious pupils, who idolised his deceased predecessor.

The trailer for the new comedy series starring Nick Frost.