Parents Lillie and Eddie clash over marriage, Babs has had enough of husband Dickie's gambling, and womaniser Clint is intrigued by model Abbey. 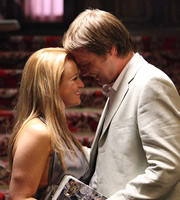 Lillie and Eddie have been going out for 16 years. They live together and they have two children, Harry and Joe. Their relationship is perfect, except that Eddie wants to get married and Lillie doesn't. Every year on Lillie's birthday, Eddie proposes, but every year she says no. Lillie argues that marriage destroys love; she sees it happen everyday at the central women's shelter where she works.

It's Lillie's birthday and this year Eddie hopes she will change her mind and accept his proposal, but when Lillie wakes to find post-it notes stuck on the bedroom window spelling 'will you marry me?' she turns him down flat.

Being 16 years old, Harry couldn't think of anything more embarrassing than going to his parents wedding. However, 11 year old Joe is determined to see his parents tie the knot. Joe wants Eddie to propose at Lillie's birthday party but when Lillie is attacked by Mr Connelly, an ex-husband breaking his restraining order at the women's shelter, Eddie realises she will never change her mind and agree to marry him.

As Lillie's birthday party approaches, Joe decides that if he wants to see his parents marry, he's got to help...

Lillie's best friend, Babs has been married to Dickie for 10 years. Dickie has ambitions of internet entrepreneurial success but these are constantly thwarted by his love of online poker. Babs can't cope with Dickie's laidback attitude to money and reaches breaking point.

Dickie tries to patch up their marriage by selling his beloved Harley Davidson in exchange for a life-changing 'surprise' he hopes Babs will love. Meanwhile, Babs confides her troubles to Lillie. She decides it's time for Dickie to move out but is reluctant to throw him out on the streets. Just when Babs is wondering where he is going to live, Dickie appears with his 'surprise' and solves the problem.

Dickie's little brother Clint is a serial womaniser. He has just met gorgeous model, Abbey. Expecting to charm her into bed and never call her again, he is caught off guard when Abbey sees straight through him. Abbey leaves Clint without giving him her phone number.

Clint is intrigued by this beautiful, smart and witty woman and is determined to secure a date. Clint tracks Abbey down at work and she agrees to go to Lillie's birthday party with him - but only so she can vet him through his friends. Clint prays his friends will give him a glowing report. Could this be the woman who will change Clint's playboy ways?