Lily Allen faces death, Gwyneth Paltrow tells you what cereal you should be eating, and Penelope Cruz's lost audition tape for Notting Hill. Meanwhile, the Queen has to deal with Edward crying again, Captain Rosie investigates China, Caroline tells Darren she's pregnant and the Victorian Strumpets dodge the London Strangler. Plus pop parodies of The Killers, U2 and The Saturdays.
Preview clip 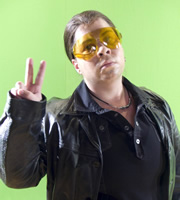 House of York TV: What Not To Wear

Katy Brand has had enough of The Saturdays.