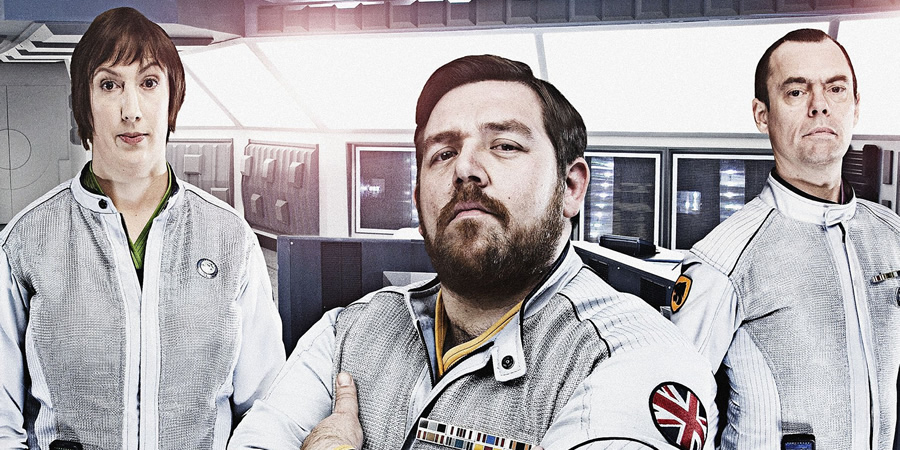 For most people, the journey to work is a daily grind that involves packed commuter trains and countless traffic jams. But for Nick Frost, his role in science-fiction comedy Hyperdrive saw him starting each day at work with a difference.

"I used to walk to work along the corridor of a spaceship!" explains Nick. "I would arrive on set through the ship's airlock and then walk along one of the corridors so I really felt like one of the ship's crew! It was fantastic!"

Set in 2151, Hyperdrive is written by Kevin Cecil and Andy Riley, who co-wrote the Bafta Award-winning third series of Black Books, and follows the crew of the HMS Camden Lock as they go about their day-to-day lives promoting Britain in the 22nd century. Frost plays Space Commander Henderson, who is at the helm of the ship.

"Henderson is an optimistic man but slightly deluded," says Nick. "I think he tries too hard to be liked by the rest of the crew but then doesn't try hard enough in other areas. He does try to be an inspiration to the team but he never seems to really have that much success. Despite his failures, the one thing that Henderson would like more than anything else in life is for someone to put up a statue to him after he dies!" 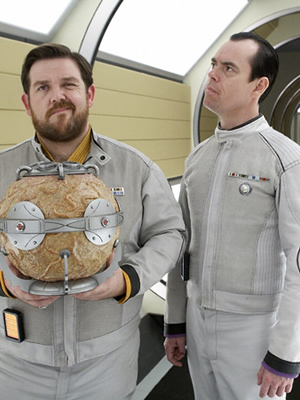 Henderson's right-hand man is First Officer York, played by Kevin Eldon. Nick was delighted that he and Kevin have finally been given the opportunity to work together. "I've known Kevin for quite a while but we've never worked together before. I had a tiny part in Big Train which he was in and he had a couple of days on Spaced but we didn't have any scenes together, so it's nice to work so closely at last. It's funny because although Henderson is in charge of the ship, off the set it was a different matter as it was definitely Kevin who was in charge!"

How about the rest of the cast? "We all got on really well," says Nick. "We're all really different people and we come from different backgrounds but it worked. I think that comes through in the dynamic of the ship's crew as well; because we got on well off-screen, that gave us a nice shorthand on screen.

"There's a particularly nice relationship between Henderson and Teal," continues Nick. "She's definitely the love interest and there's a lot of tension between the two of them which develops throughout the series. It was great to play that with Miranda; it reminds me a bit of Kenneth Williams and Hattie Jacques in the Carry On films - that same dynamic where they really like each other but every now and again she comes on a bit strong and he pulls back."

The mission of the crew of the HMS Camden Lock is to protect Britain's interests in a changing galaxy and in Episode 1, that sees them trying to persuade an alien race called the Glish to relocate their business to the Peterborough enterprise zone.

"The Glish are a strange race who like to lick people as a form of greeting," laughs Nick. "They lick your hands and sometimes your face so I had to make sure my hands were clean and smelling of Imperial Leather that day! The meeting with the Glish doesn't exactly go to plan and, as they leave the ship, they leave a little present behind - a man-eating parasite which wreaks havoc!".

Future episodes in Series 1 see the crew visit the planet of Queppu; hold peace talks between the Lallakiss and the Bullah, two feuding alien species; and cross paths with Clare Winchester (played by Sally Phillips), the famous round-the-galaxy solo spacewoman.

"The episode about Queppu was a great one to film," enthuses Nick. "We go down to the planet to meet the aliens and try to sell them a Barratt palace. This species of aliens is a lot like us, really, but they wear these massive inflatable headdresses which look amazing. It's been a long time since they have had any contact with humans so they are very excited. But when Henderson falls in love with the King's daughter, Teal becomes jealous and yet again things don't go to plan."

Despite enjoying being the commander of his own space ship, Nick has no aspirations to follow in Henderson 's footsteps. "I don't like the idea of being up in space, locked in a ship," explains Nick. "It's a bit claustrophobic and I would be very aware of the fact that I was miles from nowhere. But I would love to do another series of Hyperdrive!"