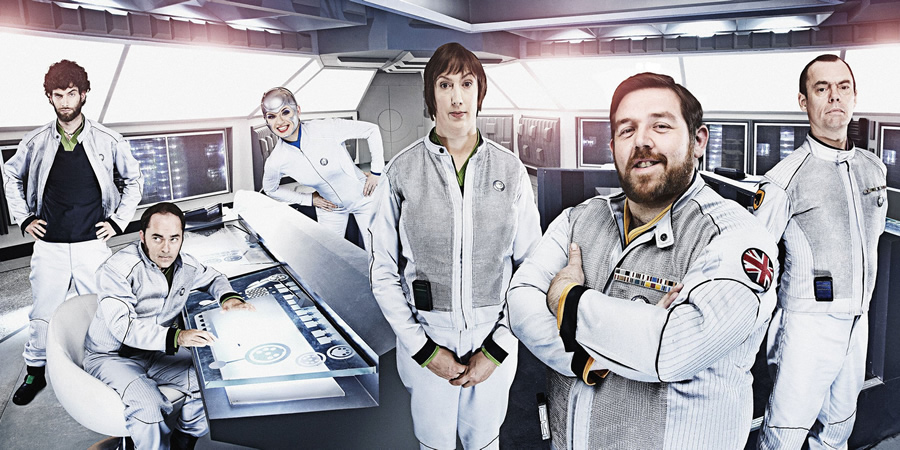 Hyperdrive is a science fiction comedy on BBC Two which follows the crew of British spaceship HMS Camden Lock as they go about their day to day lives promoting Britain in the 22nd century.

The comedy is written by Kevin Cecil and Andy Riley; the pair previously co-wrote the BAFTA award-winning third series of Black Books. Heading up the cast is Nick Frost as Space Commander Henderson and Kevin Eldon as First Officer York.

Hyperdrive is set in 2151 and the crew of HMS Camden Lock are on a mission. Their mission is not to explore new worlds or seek out new life but to protect Britain's interests in a changing galaxy by encouraging aliens to relocate their businesses to Peterborough and take holidays in The Lake District! As they voyage through space the crew have to contend with anti-gravity failures, annoying talking doors and wars with alien races.

Commander Henderson is at the helm of the ship. He is an optimistic but deluded man who always thinks his orders are "open to interpretation". His right hand man is First Officer York, a brilliant scientist and polymath but also a borderline sociopath who thinks he should be in command.

Also appearing are Miranda Hart as the meticulous Diplomatic Officer Teal who is in love with Henderson; Stephen Evans as Navigator Vine, a depressive who is a danger to himself and the rest of the crew; Dan Antopolski as the slouching and insubordinate Technical Officer Jeffers; Petra Massey as Pilot Sandstrom, an enhanced human; and Paterson Joseph as the slippery and hugely ambitious Space Marshal Clarke.

Executive Producer Jon Plowman told the press: "Kevin and Andy have done a tremendous job in coming up with what I think is a totally original script. Hyperdrive is partly about the crew of the HMS Camden Lock trying to persuade aliens to relocate to Britain whilst the Americans offer Florida, and partly about a group of people being stuck together in a confined space for a long time."

Hyperdrive was filming in the alien world of Manchester. It was produced by Alex Walsh-Taylor and directed by John Henderson.