Series 1, Episode 3 - Mouse In The House With Warwick Davis 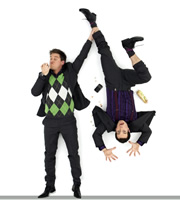 Dick and Dom are joined by Warwick Davis, Hollywood star of Harry Potter, Star Wars and Narnia; and new acts Frisky and Mannish, Mandy Muden and the Rootin' Tootin' Cowboys in a mirthful mixture of sketches.

As well as the action on stage, wrestlers The Devastation Brothers send another trash-talking video message to Dick and Dom and the 40-year-old cub is still desperately trying to secure all his badges so he can join the Scouts.

Plus we learn more about laughs in the History of Slapstick and enjoy some unorthodox beat boxing from Fhlip Fhlop.

In the big finale Dick and Dom help improvisational rap duo Abandoman wrap up the show with their inimitable tribute to Warwick.