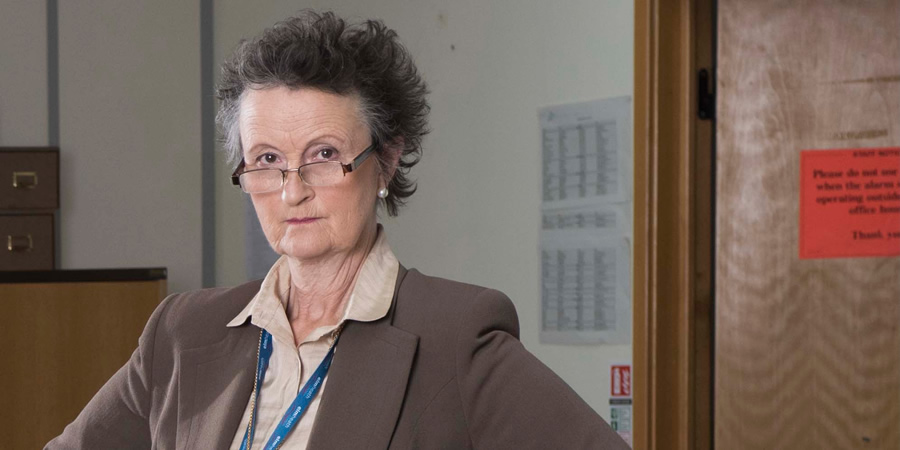 Georgie Glen says her character Denise is not a 'baddie'.

Can you tell us a bit about the show?

Well, the show is set in a social services office; it's a compassionate observation of the lives of social workers struggling to get on with their work which is very hard whilst at the same time having their own lives encroaching all the time. It's not in any way judgmental or political but it's a window onto a real world. Some of the characters are slightly heightened in order to provide humour but it's done in a very realistic way.

And you play Denise who runs the department and is rather universally feared...

As an actor you always empathise with your character, you have to in a way to play them, because they are real people. I think Denise, like all of them, is just doing her best. She's described as an "acting up manager" which I think means that she's temporary, so she's been thrown in to sort out the department and meet the government target, it's a thankless job.

She's desperately trying to keep her unruly mob in hand so if she's seen as being a baddie I don't think that's fair, she's just struggling as they all are, but maybe on a slightly different platform. She's lonely too, she hasn't got friends so she can't sit and chat like Jo and Alan's characters, she has no one else in her little office and she's in charge so she can't really confide in anyone there. If she was meeting up with another manager in the next office I'm sure they could have great conversations over the coffee machine but she can't so she's just trying to do her best.

Did you do any research into what it was like being a social worker beforehand?

I didn't go to an office and pin down some poor acting up manager who's obviously going to be up against it. I think the research that Morwenna and Jo did, as Jo has worked in the health care system, not to mention that they had a very reliable source from within the social work system, kept them very much on track.

I think Denise's part was very clearly defined, she's probably like many office managers dealing with the stresses and pressure of her position and I think that was enough for me. I relied heavily on the script and if we felt there were things that seemed slightly unreal of far-fetched we'd query it and then Jo and Morwenna would absolutely reassure me that far, far worse goes on in the real world.

The show was filmed in real offices - did you find it helpful to be there?

Hugely helpful! You felt you were in a real office, obviously because you were and there was another identical office next door full of people doing real work, so it was surreal. To get to our green room, where we often had to go to in between takes, we had to walk through this real office with these people eating their sandwiches out of their tupperware boxes chained to their desk, whilst we swanned through in our pretend outfits and were brought our lunches on plates - I felt slightly uncomfortable about it but they were all terribly friendly. We had a rather jolly time waving and chatting to them but it did help in a way because they were literally there doing it a wall away.

The writers Jo and Morwenna both star in the show too - what was it like working with them and having them there on set?

Essential... completely essential. The whole shoot became a very close family for 6 weeks and with Jo and Morwenna both there who are constantly reassuring us and telling us more anecdotes and stories about what went on. It almost felt like it was real to be honest!

The supporting actors were brilliant and they'd been held over from the pilot which we did a few years ago and they were kept for the real show itself. They were brilliant! I watched it back and you do just think "well this is reality". It helps hugely I think, you just felt that you were in it and from an actors point of view it was sort of an effortless shoot for me and hugely enjoyable and it was over before I felt that it had begun. It was very sad when it ended because it just became like daily life heading to the office every day!

The show depicts the reality of social work - showing the challenges that they are faced with day-to-day - why do you think a comedy was the right fit for the show?

It's a funny thing, I took my two daughters to watch the show who are in their late 20s and they were expecting a comedy and they were blown away by it. They said it's one of the best things they've seen in a long time because although it was entertaining and there were laughs, there was sharp reality all the time as well.

So I wouldn't describe it as a comedy exactly, I don't know how I'd describe it... maybe a wry observation with humour and some pretty uncomfortable truths as well. It just colours the show all the time and reminds you of the reality of the world. Ian [the director] was brilliant because he understood the finished project that sometimes I certainly didn't understand as I was filming. He knew what he had to get and we trusted him - he was superb. And then in the edit with Adam, I think he was brilliant as well because he's edited it so sharply observed and witty. That's where the humour lies and it becomes something you can be entertained by even though you are being made very aware of the harsh reality of life.

Denise and Himesh Patel's character Nitin have an interesting relationship - can you explain a bit about that?

I think I see where Himesh's character is coming from and I use him as a pawn, I realise he's incredibly ambitious and irritating but useful to me in terms of what I'm trying to do, whereas any of the others would have been far too loyal. I realise in his way he's an outsider as well in the office, he's teased by the others and isn't in the 'in crowd'. He's seen as a figure of fun and I know that I can recruit him for my purposes but he's completely dispensable once I've finished with him.

I think Denise is a little unkind, she uses him and plays on the fact that he's desperate to be a teacher's pet and she is happy to use him as such. I did feel a bit like a teacher in fact - I played Audrey in Waterloo Road for three years and it was not too dissimilar. I have to say the office was like a class of unruly kids that I had to somehow keep control of.

Was it hard having to be rather awful to Himesh?

No, not at all - because I think Denise realises that he can be a bit of a twit and she can just use him and send him on his way. She does use him and she plays him because she needs to make the cuts and do what she needs to do... but Himesh is lovely!

From being a part of the show do you have a new found awareness or appreciation of the work that social workers do? Do you think it'll help alleviate some of the unfair stigma that is often associated with them?

I think I do, because what Jo and Morwenna are doing is showing that social workers have their own lives that they are dealing with and when you're reading a paper about a social worker it's easy to forget that.

The show is called Damned because you're damned if you do and damned if you don't. You often think 'why didn't they see that that child was in danger' and I'm guilty of that too, but people forget that they are real people and are doing their best. It's not through neglect and they're struggling all the time. Like scenes in the show, they're probably getting hundreds of thousands of phone calls that are just time wasting and they, in the midst of their own real life, are having to pinpoint the one that is vital for the safeguard of a child or a person and it's an impossible job. It's heightened my awareness of that, I don't think it's told me anything I didn't know but it's going to make me feel differently the next time I read another article.

Being on set with so many comedians - I imagine there were lots of laughs? What was it like? Any funny stories?

There were - I got the joy of being audience cause I'm not a comedian in any way shape or form so it was great! I listened and loved every minute of it, they are all a joy to be around. They're not all wisecracking all the time, they're highly intelligent people who are able to see humour in real life and that's always very entertaining company to be in. I would hope the fact that we really formed a tight team comes across, that's all of us directors, producers and Channel 4 were incredibly supportive. The whole thing became a very intimate company and I think that helped, it really felt a very nice project to be working on that hopefully comes across.