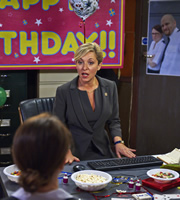 A prisoner escapes. Creg is first in the firing line when no-nonsense Prison Governor Riley decides to get to the bottom of the disappearance.

Not a fan of Esteban, Luke is initially delighted until he is instructed by Marcel to work out how he escaped and his attempts lead him to a shocking discovery in the prison garden. Can he keep his dangerous secret from Jason, and is Jason hiding something too?

You shouldn't sneak up on people

Creg gets something stuck on his trousers.