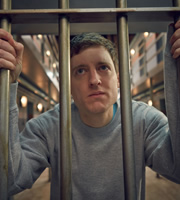 Luke inadvertently finds himself sentenced to two years in Young Offender Institution Sunnybank View after becoming a bank robber's getaway driver, along with the bank robber in question, his girlfriend's brother and so-called friend - Jason. To make matters worse he has to share a cell with Jason. Luke will have to rely on Jason's street smarts to get him through. Unfortunately, Jason is a massive idiot.

As Luke prepares for a life inside with cellmate Jason, things go from bad to worse as prison officers Dawn and Creg take a disliking to him, which doesn't help when he makes enemies with prison hard-men Marcel and Daz. Taking matters into his own hands, Jason challenges the pair to a fight with the help of his newly invented gang Lulu's Mob.

The only thing keeping Luke going was knowing that his girlfriend Gemma was sticking by him - but now she keeps talking about her new friend Roger. Can Luke save his relationship and avoid being mutilated?

Dawn warns Creg that her Facebook photos have been hacked after he discovers he can't access them anymore...