Marcel and Daz are furious after Dawn's clampdown on drugs, so in an attempt to boost Luke's popularity, Jason volunteers him for a drugs snatch from the warden's office.
Preview clip 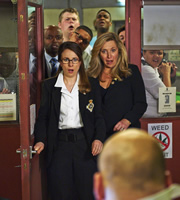 Marcel and Daz are furious after Prison Officer Dawn's clampdown on drugs. In an attempt to boost Luke's popularity, Jason volunteers him to go and get the drugs back from the warden's office.

Meanwhile, the press have picked up on Dawn's initiative and come to the prison to see her hand over the confiscated stash to a government minister but that's not great news for Creg who can't find the drugs - will he be able to recover the missing stash in time?

Meanwhile, Luke finally has the upper hand, having Marcel in his debt and compromising information about Creg - but his new prison status isn't quite what he expected and puts his relationship with Gemma in serious jeopardy.