When Michael makes the mistake of getting Arthur online, he ends up being mistaken for a murderer.
Preview clips 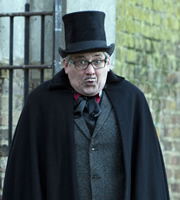 Sinem tells Michael he should do something in return for all the help Arthur has been giving him in writing his father's biography, so he decides to show him how the internet could help in his search for work - with chaotic results.

Michael also ends up being mistaken for a murderer while helping out on the former variety star's Jack the Ripper tour.

Michael mistakes a fellow customer for working in the newsagents.