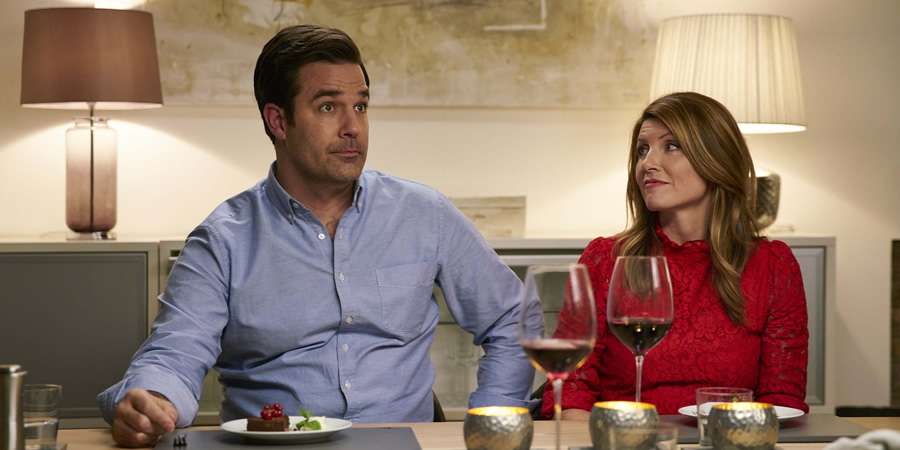 Catastrophe is back for another series. Creators and stars Sharon Horgan and Rob Delaney have the below to say on the topic of Series 3...

We left Series 2 on something of a cliffhanger, with Rob about to speak following his discovery of Sharon's receipt for the morning after pill. Where do we pick it up from?

Rob: Right then. Exactly then.

Sharon: Yeah, it's from exactly that moment.

When you shot the end of the last series, did you know what Rob was about to say, or did you still have to work that out?

R: We didn't know. We love to leave the series with a big question mark, and figure out the answer afterwards. It's more fun for us that way, and hopefully there is real and palpable mystery for the viewer as they reach that question mark. If we know what's going to happen, then they might too, and then why bother?

S: There were a few different routes we could've gone, so we kind of had vague ideas, but nothing concrete.

Series 3 and 4 were commissioned together. Do you know where it's going to go in Series 4?

R: No. We did Series 1 and 2 back-to-back, and we really benefitted from taking a little break between 2 and 3, so I think we're happy to not know what's going to happen for a little while.

S: We had ideas of stuff that could go in Series 3 when we were writing Series 2, things like that, but we never knew what the big arc was going to be, or narratively where it was going to take us. We just had a bunch of little ideas, and it worked out okay. So hopefully that'll happen this time.

Did you write Series 3 differently because you knew there would be a Series 4? Does that help you creatively, because you know you have more space to tell the story?

R: It's a stunning act of generosity and a vote of confidence from the network to have them do that, so yes, it does give you a feeling of peace.

S: There were definitely moments where we would say "I think that's more of a Series 4 idea."

R: Yeah, so we can figure out what's going to fit in each episode. You can say "I am curious about that, but no way are we going to be able to squeeze that in," whereas if we didn't know there were an additional season commissioned, we might try to shoehorn it in, to everyone's detriment.

S: I guess the smart thing to do would have been to plan out both series so we knew exactly where it was going over twelve episodes, but we just didn't have the time to do that. We had to concentrate on getting Series 3 made in the four or five months we had. 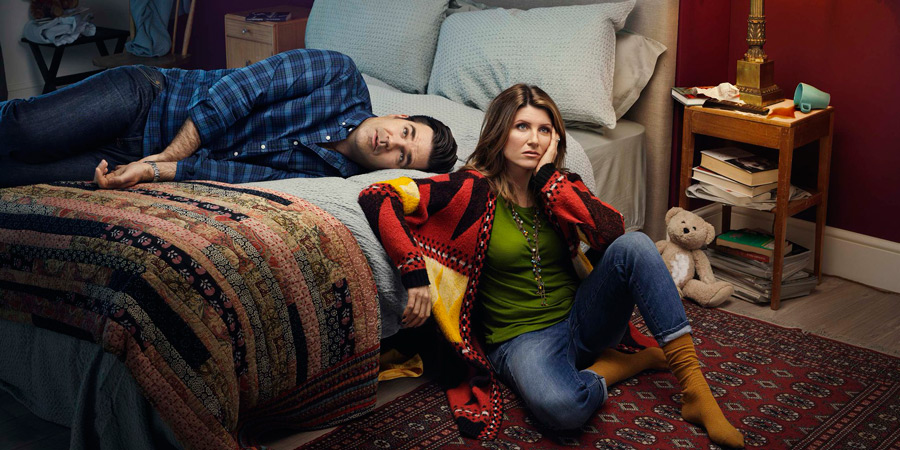 Catastrophe is unapologetically crude. Do you enjoy coming up with some of the more creative and colourful bits of dialogue? Do you ever worry about elderly family members watching?

R: Elderly people, I have found, when they're being honest, are also scumbags, and enjoy a little prurient humour as well. So no, I don't really worry.

S: I used to worry about that sort of thing. But I watched Pulling with my auntie, who's a nun. I gave my dad the pilot of Catastrophe, because we had it for about a year before it got picked up, and he showed it to so many people. There was some pretty crass stuff in there, there was plenty of sex in it and rude goings on. If he's happy to show his 70-year-old mates, then I think there's nothing to worry about really. Although, I'm a little bit worried about Episode 1 of this series.

R: Oh, I know what you're talking about!

The show is far from sentimental, but it still manages to be strangely romantic. Is that a tough trick to pull off? Do you have to go through it making it less saccharine?

R: We're pretty good about it. I remember in Season 2 having to saccharine it up a bit. Our natural inclination is not usually to be too saccharine. If anything like that comes out of our mouth, the other will stop them pretty quickly. You'd rather have your audience come away saying "I think I just noticed that they're in love" rather than hitting them over the head with it.

Catastrophe very definitely deals with flawed people making the best of a flawed relationship. Is that intentional - to show people that it's possible to have problems and still be relatively happy?

S: I kind of don't think their relationship is that flawed. I mean, I guess it is in that they fuck up sometimes, or might let themselves or each other down. But I think they were made for each other. They were born to be together. That's the most fairy tale and romantic aspect of the whole thing. We've burst the bubble pretty quickly with all the bad things that happen. But it feels like a steady, sturdy relationship that shit happens to, and they deal with it. I don't think they have to try and stay in love. They are in love, they just have to try and stop real life from tipping shit on that.

One of the cornerstones of their relationship seems to be that they make each other laugh. Do you see that as being key to them?

R: I think so, yeah. People say that the largest sexual organ is the brain, and I think the fact that they definitely amuse each other is probably the strongest glue in that relationship.

S: Yeah, definitely. Because I think it's incredibly important in real life as well. You get on with the people who make you laugh. I love having conversations with smart people, but I don't necessarily leave it going "I fucking love you!" whereas if I've spent an hour laughing with them... 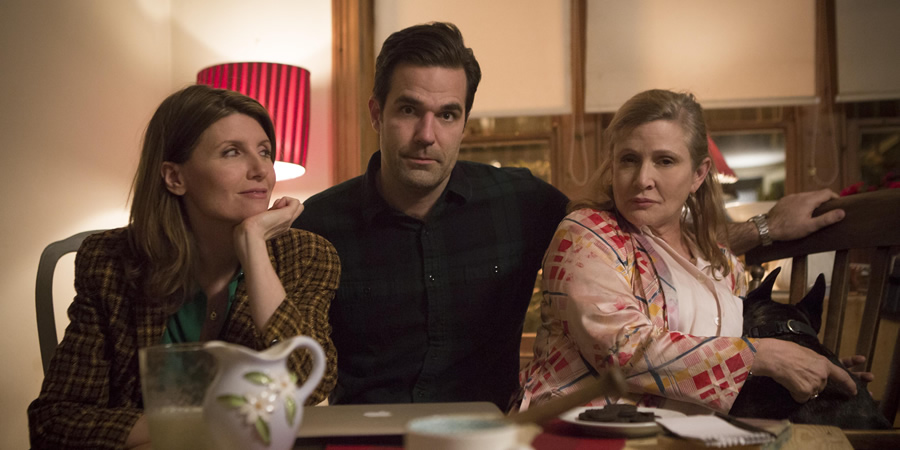 This series was one of the last things that Carrie Fisher filmed. What was it like getting to know her and working with her?

S: It was a dream come true getting to work with her.

R: She didn't get to where she is by mistake. She delivers. She's just hilarious and brilliant. You get what you think you're going to get, and more. She was just a wonderful, wonderful person.

S: Yeah, she was great to hang around with and great to work with. While you're completely aware of her legacy and everything she's done, and it's completely overwhelming a first, then she's just this woman who says rude things and cracks you up. And she was really kind as well, just a really kind, wonderful lady.

R: Some awards we've had to divvy up. But BAFTA make one for each named recipient, so thanks BAFTA!

What is it like working with the children on the show? Do you have to get to know them really well so they don't recoil when you pick them up?

R: Yeah they like us, and we like them. They're lovely. Babies are an absolute pleasure. Sonny and Dexter, who are the twins who play Frankie, are a bit older. They're wonderful, but they're a little harder to work with, because it's a super-unnatural situation to be in. Working on set is very artificial and bizarre, and for kids it's like "Why would we do it again? That's crazy!" And then you have to be like "Yes, it is crazy, but not only are we going to do it one more time, we're going to do it 22 more times." And they're like "That's INSANE!" So they're having a tough time with it, but that's only because they're healthy, wonderful children.

S: But we both like the company of kids, we like hanging out with kids, so it makes it easier. When the cameras stop rolling, you can have a laugh with them. But you can't get them too geed up, because then they're all hyper. You find yourself going "Shit, why did I tickle him?" You have to know how to play it. But when they bring in a baby or one of the twins, we really enjoy it.

R: On a set filled with smelly adults it's pretty nice to have a kid come in now and again. 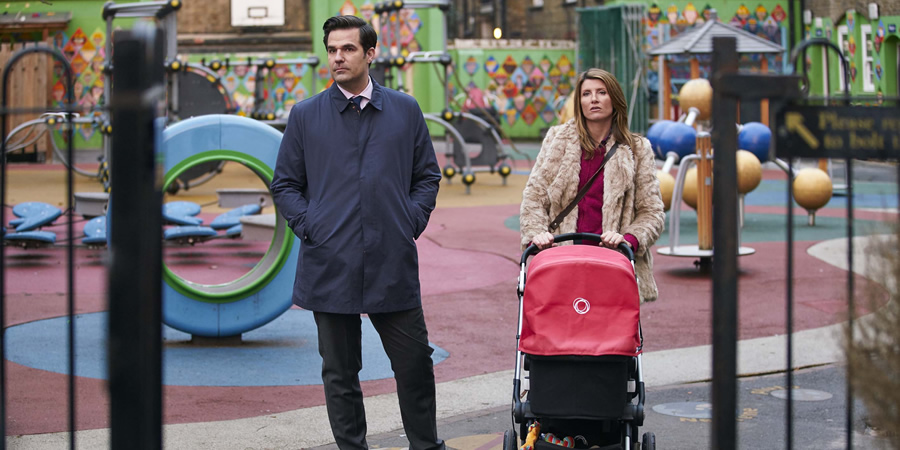 You briefly reference Trump and Brexit in Episode 1 of the new series. Will there be any more nods to the way the world is going?

S: It just came up in that episode because I'm trying to find reasons to get away with behaving the way I did. In the original script it was Brexit and ISIS, and then suddenly that arsehole-buffoon got voted in and we thought "We can't not mention him!" So we added that in our final read-through.

Rob, you've been pretty active of late on Twitter, even by your standards. Is it a relief to be over here and away from the whole shitstorm, or is it frustrating being so distanced and powerless to act?

R: It is weird being over here. And I can't move back there right now. Not that I want to - we're happy here, my children go to school here - but it's weird to not have the option. But he's [Trump] got healthcare laws in his sights, and I'm part of a family of five people. And when you have five people, there will be some among them who have what are known as pre-existing conditions, so I can't responsibly bring my children to a country where healthcare is in such upheaval. So that feels weird. And yeah, I'd like to be outside senators' offices right now protesting, but I can't right now. So I'm doing what I can from here.

We read somewhere that you two are planning to do a movie together. Is that a possibility?

S: It's not in the pipeline. We talk about it A LOT!

R: We talk about it, and then somebody will be like "Hey, get back to set," or "Where's that script?"

S: We'd absolutely love to. It's just a time thing.

Would it be a Catastrophe movie?

When you're writing, do you guys have more ownership of your own character?

R: No, definitely not. Nothing makes me happier than writing dialogue for the character of Sharon, and have her write it for my character.

S: I think that's why there's no stereotypical element to either of them.

When do you start on Series 4? Do you need time away from the characters first?

R: It's a good idea to have a break, to let your mind rest and so you can start to cultivate ideas. So we don't have a start date, but we're percolating ideas, I guess.

Can you ever have a bit of a break, or are you always thinking "Ooh, I might put that into the next series?"

S: You do do that a little bit, yeah.

R: You definitely file things away, I've got a tonne of stuff in the notes section of my phone. Most of it is fucking insane, though. "Here's a good idea. What if... Rob walked into a spider's web!!!"