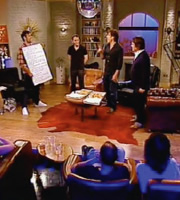 This week, Richard opens the door of his flat to Green Wing star Stephen Mangan, comedian and broadcaster Jon Richardson and self-confessed show-off Charlie Baker, who is best described as Frank Sinatra meets Jethro - with a touch of Jack Black. Topics up for discussion include which TV shows are suitable for viewing in your underpants and the worst jobs the guests have had to endure. The boys also ask each other which are the things they just don't get that everyone else seems to love.