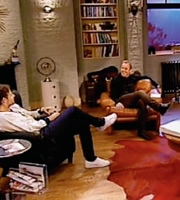 On the first show, Richard welcomes TV presenter and football fan Tim Lovejoy, comedian and music festival devotee Rufus Hound and comedian, singer and musician Charlie Baker - also known as Devon's answer to Frank Sinatra. Their chosen topics include the most inappropriate thing each has ever done and the Olympic activity they would like to be champion at.