Simon knows he's good-looking but when boyfriend Sacha comments on his broken nose, he starts to reminisce...
Preview clips 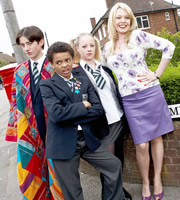 1997: Reading. When Simon and Kylie - assisted by their pushy stage-mums - decide to audition for the school production of Joseph, their noses are put out of joint when the lead role goes to rival Imelda.

The boys are inconsolable, and not even fantasising over their future Broadway production of Ab Fab The Musical convinces them that playing a Palm Tree is their sole purpose in life.

Debbie decides to take matters into her own hands when she spots Imelda and drama teacher Mr Bell together in a restaurant and consequently ends up facing criminal charges.

Imelda rebukes Simon's peace offering and he ends up with a swollen nose. Teaming up with Kylie, the pair seek revenge and attempt to sabotage Imelda's show-stopping finale on the opening night.

Simon's school are looking for someone to play the lead role in Joseph and the Amazing Technicolor Dreamcoat.

Dancing in the Street

Another joyful camp dance number from the sitcom.