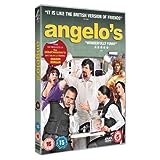 Is there anything more definitively British than the 'greasy spoon' experience? Full English breakfasts, mugs of mud coloured tea, chipped formica tables, signed publicity stills of now fading celebrities who may have strayed this way for a little (fried) slice of cafe life. It's arguably one of Britain's greatest traditions; especially when it's run by foreigners.

Angelo's is a café in the heart of London, a short stroll from the tourist Mecca of Trafalgar Square, the grandeur of Whitehall and the sex shops of sleazy Soho. This unique geographical location means it is also the meeting place for a whole motley crew of diverse, deftly drawn characters from the imagination of writer Sharon Horgan (Pulling, Annually Retentive).

Starring Steve Brody and Shelley Longworth alongside Horgan, Kim Wall, Simon Farnaby and Alice Lowe, Angelo's is a show you won't want to miss (and a café you probably wouldn't want to eat in).