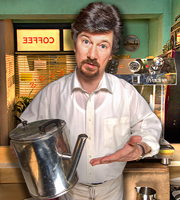 Angelo the owner of Angelo's, a greasy spoon café resting just yards from the hustle and bustle of Trafalgar Square. Angelo is an Italian who has lived in London most of his life and so speaks Italian cockney. He's kind and caring to his regulars and dotes on his daughter Maria who also works alongside him.

The café owner is a poor judge of character, but he loves his adopted homeland and has become more English than the English to the extent that he has a very low opinion of foreigners coming into the country. He is always rudely reminded of his own origins but shrugs it off as just funny banter with the customers.

Angelo has pictures of a number of famous celebrities on his walls - Lady Diana and The Queen Mum are his two favourites. He has signed a number of the photos to make it look like the stars have visited his café - it isn't fooling anyone though. 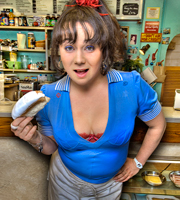 Maria is the daughter of café owner Angelo. She is desperate to become famous and make it big, leaving behind her drab day-to-day life in the café.

She hates working in the café because she stinks of chips and it gets her down, but her boredom is eased as her best friend, Alicia, spends her days in the café agreeing with everything Maria says, whether she believes it or not.

Maria is convinced her break will happen through The X Factor, American Idol, or in fact any TV talent show; she sees it as her way out. She has concocted some raunchy songs in the hope that it might impress Simon Cowell. Her dad, who hasn't properly understood the explicit lyrics, thinks she has a great voice and the songs are beautiful. 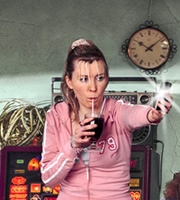 Alicia spends most of her time wearing a pink tracksuit and blagging free crisps and drinks. She is Maria's best friend and also, probably, her worst enemy.

Alicia envies Maria's life and as a result spends most of her time trying to make it her own, mostly by making a play for Maria's boyfriend Mickey. Unfortunately she's too stupid to be subtle about it.

For some reason, she also has a bit of a crush on mime artist Kris. 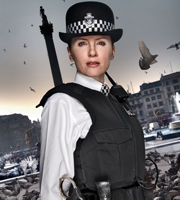 Karen is desperate to have a baby. She's thirty-five and her body clock doesn't just tick, it cuckoos on the hour.

Karen is married to fellow police officer Dave. You could say that she wears the trousers in their relationship but really she's just organised. If she wasn't organised, nothing would get done - no doctor's appointments, no organised sex during ovulation and no dietary regimes to aid fertility! It's no wonder Dave is stressed. 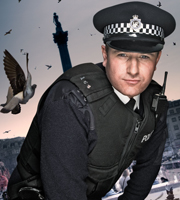 Dave is forever being told by his wife that it's his fault for their lack of children. Unbeknown to him, Karen is considering desperate measures which might involve his brother Kevin - who has no such problems in the procreation department.

Dave is unsurprisingly somewhat worried that Karen's maternal instincts are getting in the way of their job as police officers - for example, at one point Karen takes a lost child on a day-trip around London - not really a suitable thing for an on-duty cop to do. 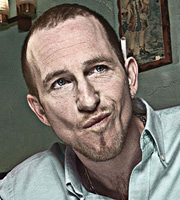 Kevin is Dave's dodgy brother. He is a proper rogue, always looking to spread his seed. He has had so many kids he can't remember their names, their birthdays, where they are and who their mums are. He can always be found kissing some new girlfriend.

Because Dave and Karen are having problems in the reproduction department, Kevin offers his services to impregnate his brother's wife - the natural way. She's really desperate for a kid, so it's the natural brotherly thing to offer to do; well it is for Kevin anyway! Oh and he wants a grand for his 'services'. 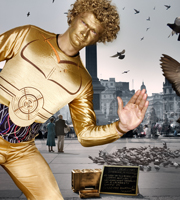 Kris is a struggling actor who earns his living by painting himself gold and charging tourists £2 a time to take his picture.

Having fallen on hard times, Kris has been forced into busking - and it's something he's actually rather embarrassed about. He has a big crush on Maria, who clearly isn't interested. He tries to woo her with talk of his fabulous acting skills but is constantly knocked back.

When not pursuing Maria, Kris is trying to get a signed picture of himself onto Angelo's picture wall without the proprietor noticing, standing in line to deliver another horrifically bad audition for something or voicing his dislike of Jude Law. 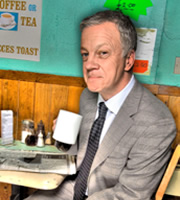 Russell is a married man who has been made redundant but is far too proud (and afraid) to tell his wife, so inside spends his days in the café trawling through the jobs pages.

Russell is always trying to get out of his current predicament and get working again but he seems to always make the wrong choices and gets himself involved in dodgy scams.

It becomes quite obvious early on that Russell is unlikely to ever find another job. 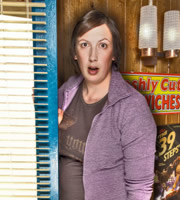 Shelley is the man-obsessed driver of an illegal mini-cab driver who will go to almost any lengths to snare a man.

The taxi driver has started a little club called 'the promise keepers' a place for virgins to come and talk about... well, being virgins! As she keeps telling her customers, she's saving herself for the one. It just so happens the one will the first man who doesn't manage to escape her cab.

Shelley certainly makes it uncomfortable for any males who step into her car: she often plays romantic music and talks about her love life to them. At one point Shelley sets up a blind date with a passenger who is unlucky enough to have left his wallet behind in her cab. 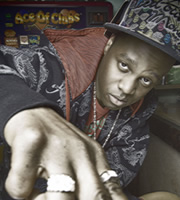 Mickey P is a rude boy with a good heart. He is Maria's boyfriend and dreams of one day becoming another P Diddy. His relationship with Maria is stormy and he has to vie for her affections in competition with struggling actor Kris.

Mickey also has a relationship going on with Maria's friend Alicia - a tricky situation not helped by the fact that Alicia really doesn't want to share him with her friend.