Based on his 2019 Edinburgh Fringe solo debut, Gentlemon, in which the stand-up and sketch comic celebrated his Black Country roots, "it is loosely about changing post-industrial landscapes, pigeon flying, faith and aspirationalism" he announced on social media. "But chiefly it's just impressions of my family, all of whom are funnier and more interesting than me."

Recording this summer, the 30-minute special will be produced by Suzy Grant (Joe Lycett's Obsessions, Newsjack).

Reviewing Gentlemon, The Guardian called it "a hymn" to a "disappearing world, a rumination on class identity and social mobility - and a distinctive maiden solo show", while the Scotsman described him as "a contradictory, fogeyish figure, trepidatiously picking his way over the treacherous terrain of the British class system ... a gifted, slightly messed-up eccentric".

Cast in Jason Cook's forthcoming Murder, They Hope series with Johnny Vegas and Sian Gibson for Gold and a voice artist for Britbox's Spitting Image revival, Fouracres is probably best known for being part of the sketch trio Daphne, alongside Phil Wang and Jason Forbes.

The group recorded two series for Radio 4 between 2016 and 2017. They recently reunited on Twitter to join in with, or rather rejoin, the current sea shanty craze:

Meanwhile, Radio 4 has also commissioned a second series of Twayna Mayne: Black Women to air later this year, in which the stand-up further explores her identity as a black British woman raised in a white family. 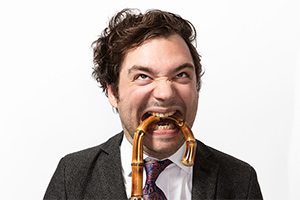