Alexei Sayle is returning to Radio 4, with his Imaginary Sandwich Bar stand-up-sketch show and the adaptation of his comic stories, The Absence Of Normal.

The veteran comic revealed the recommissions on the RHLSTP With Richard Herring podcast, stating that Alexei Sayle's The Absence Of Normal's second series would air in March.

Sayle, whose Live 2020 tour, the "favourite" of all of his stand-up shows and first in seven years, was cancelled two-thirds of the way through its run because of the coronavirus pandemic, cast doubt on whether it might return, with the material's topicality lost, rendering it "fucking pointless".

He also told Herring that he's lost 50% of his sense of smell since contracting the virus.

Elsewhere in the interview, he spoke of belatedly becoming a podcaster and his "meditative" YouTube videos in which he cycles around London, suggesting he might take the format to other parts of the UK when lockdown eases.

He denounced Labour leader Keir Starmer's socialist credentials and expanded upon his love of Tai Chi, extolling both its meditative qualities and its value for "fucking people up". He also reflected upon his role in the 1987 Hollywood flop Siesta, in which he appeared alongside Ellen Barkin, Gabriel Byrne, Martin Sheen, Jodie Foster, Isabella Rossellini and Grace Jones, admitting that he took too many film roles because he "fancied a holiday".

Dismissing the credibility of actors playing comedians on screen, he ventured that one film which does capture stand-up successfully is Judd Apatow's 2009 black comedy Funny People, which stars Adam Sandler, Seth Rogen and Jonah Hill. Sayle praised it for showing "the love that comedians have for each other and their competitive spirit as well."

It logically followed that Sayle advocated for fellow comic Omid Djalili to play him in any future biopic, recalling his friendship with Robin Williams but noting that anytime Djalili encountered the late American comedy star, Williams would greet him with, "it's really great to see you again Alexei!"

Meanwhile, Sayle is developing his memoirs for television.

After two volumes of autobiography: Stalin Ate My Homework, which was published in 2010, and 2016's Thatcher Stole My Trousers, he told BBC 6 Music presenter Shaun Keaveny in 2019 that "the deal's been done" with the BBC to adapt them.

Stalin Ate My Homework recalls his Jewish, atheist, communist upbringing in 1950s Liverpool, holidaying behind the Iron Curtain and being present during the Paris riots of 1968, ending with Sayle leaving for Chelsea School of Art.

Thatcher Stole My Trousers picks up the story in 1971 as he forms an unlikely friendship with his art school tutor Anne Rees-Mogg, mother of Conservative MP Jacob and wife of ultra-establishment Times editor William.

The book then tracks his deepening participation in left-wing politics and seminal role in the rise of the UK's alternative comedy scene compering at The Comedy Store, as well as his work on The Comic Strip and The Young Ones.

Listen to RHLSTP With Richard Herring 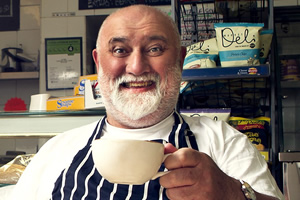 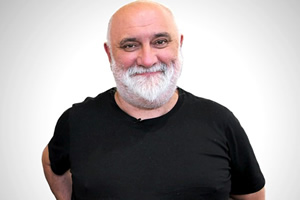 Alexei Sayle's The Absence Of Normal