It has been confirmed that BBC Four is to pilot an adaptation of Douglas Adams's novel Dirk Gently's Holistic Detective Agency.

The book is to be adapted for TV by Howard Overman, the creator of Channel 4 comedy drama Misfits, and will be made for BBC Four by ITV Studios in 2011.

The science-fiction comedy is about a private detective who believes in the fundamental interconnectedness of all things. As a result, Gently's "Holistic Detective Agency" solves the whole crime and finds the whole person, but because business is so low on the ground his main business tends to involve finding missing cats.

Two Dirk Gently novels were finished by Hitchhiker's Guide To The Galaxy author Douglas Adams: the original Dirk Gently's Holistic Detective Agency in 1987, and The Long Dark Tea-Time of the Soul in 1988. Adams was in the middle of writing a third book, The Salmon of Doubt, when he died in 2001, although he had expressed dissatisfaction with it and thought the story would be better as part of his more well known Hitchhiker's series.

This is not the first comedy adaptation of the book. In 1991 a play called Dirk was performed and, most recently, BBC Radio 4 has broadcast adaptations of the first two novels with Harry Enfield (pictured) in the title role. These were broadcast between 2007 and 2008. Work was underway on adapting the third book for radio too, but this was scrapped when it was decided that there wasn't enough material from Douglas to complete the project. The first series of the radio show won the Comedy.co.uk Award (then known as The British Comedy Guide Award) for "Best British Radio Sitcom 2008".

It is not yet known who is to star in the TV adaptation, but appearing alongside Enfield in the radio series were actors including Andrew Sachs, Olivia Colman, Robert Duncan, Felicity Montagu, Michael Fenton Stevens, Peter Davison and Jan Ravens. 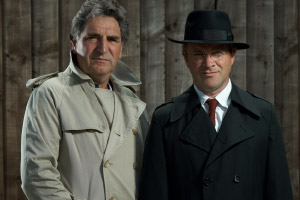