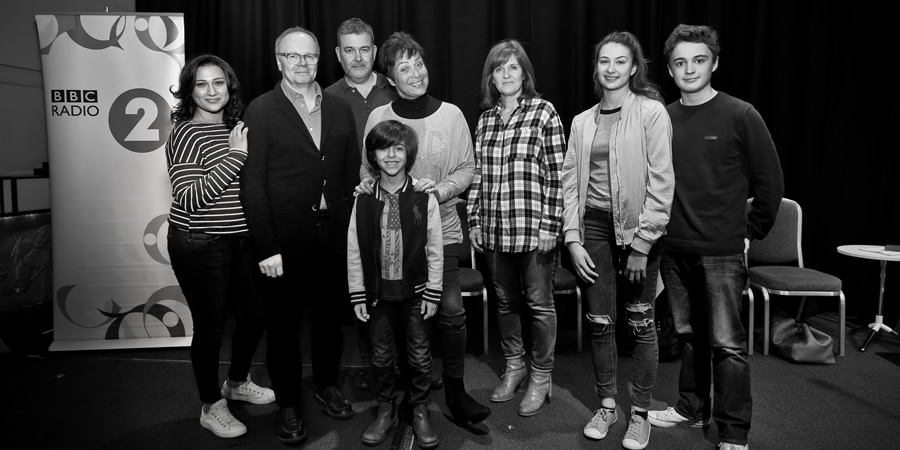 Just Grand is a new sitcom about a clash of generations and cultures. It is due to air as part of Radio 2's Comedy Showcase. Writers Danny Peak and Phil Mealey tell us more...

Hi Danny and Phil. There's probably nobody better to describe the premise of Just Grand than you, so would you do the honours?

Danny: It's about Frank and Sandra, a working-class couple from Stockport whose daughter left them behind years ago and become rich and successful. Now the daughter has been sent to prison, and Frank and Sandra get landed with a pair of grandchildren they barely know. It's an age-clash, class-war, north-south-divide type thing...

Phil: ... with laughs! The grandchildren have come from a privileged background and clearly don't want to live with their grandparents. Equally, the grandparents' dream of emigrating to Fuengirola is potentially jeopardised by having to care for the children.

This is the first time you've worked together. How did the project come to be?

Danny: We met at the Cofilmic Comedy Conference in Manchester a couple of years ago. Turns out Phil and I only live a couple of miles from each other. Phil already had the bones of the idea, and we talked about whether it might be a children's show, or a single-camera TV show, or an audience show, and then we pitched it to the BBC. And now, two and a half years later, we finally have something to show for it.

Phil: Yeah, we swapped numbers and a couple of weeks later I had the germ of an idea for Just Grand. So we met in Costa Coffee, and over a choca-mocha-ramalamadingdong type drink, and discussed the idea. Danny liked it and we went on from there.

How did you actually write it?

Danny: We wrote it sitting in a room together. The process was that we talked about each scene, vocalised everything that the characters might possibly say, and then wrote down the versions that seemed the most funny and true. For me, working that way was a novelty. I'm more used to writing alone, and to co-writing via email and Skype. I enjoyed it though, and it got me out of the house.

Phil: Most of the projects I have worked on in the past I have preferred to write in the same room as the person I am collaborating with. For me, it's more enjoyable being able to bounce ideas back and forth and testing whether something that amuses me is genuinely funny and not just my weird sense of humour. We both seemed to complement each other's style working in this way (plus it got Danny out of the house!)

You've got a great cast! Did you have any say in who would appear in the show?

Danny: They are great aren't they? We had a list of people to play Sandra and Frank, but Siobhan Finneran and Jason Watkins were at the top of it. I'm also really pleased with the kids we cast (Kate Sale and Toby Ungelson), who had the difficult job of playing spoilt and stroppy without being annoying, and who I think succeed at that brilliantly.

Phil: Our producer Julia McKenzie was great in that she allowed us to have a good deal of influence in the casting decisions and I know that we were all really pleased with how the cast gelled together. Danny also suggested that I would be perfect for Tommo, who is a middle-aged man stuck in the 'madchester' era. I don't know what gave him that idea, at first I thought he was twisting my melon man, but in the end I just thought 'top one, sorted'.

The episode was recorded in front of a live audience. Is it a nerve-racking thing, sitting there waiting for the first laugh?

Danny: We have different experiences here, because Phil was onstage as part of the cast, while I cowered at the back of the production booth chewing on the script. It is nerve racking, but there's also that sense of resignation: for better or worse, there's nothing you can do about it now.

Luckily the audience got on board with it right from the start, so it was a very enjoyable experience. The great advantage of radio recordings over TV recordings is that you don't have to re-shoot the whole scene every time there is a mistake. So everything moves faster, with more momentum and energy, and the audience are out of the studio and into the pub by nine o'clock.

Phil: Being part of the cast, I was concentrating more on overcoming my nerves about performing. Then when the show started and the audience laughed and reacted so positively, it turned into a double-edged sword - I was pleased that they were finding it funny, but worried that the laughs would dry up when it came to my turn. Fortunately that wasn't the case and who knew my squirty flower and those custard pies would work so well on the radio??!!

This episode nicely sets up the potential for more adventures. Presumably you'd love to make a series?

Danny: Yeah. We've been talking about these characters for over two years now, so we've got lots of ideas for what to do with them.

Phil: There are lots of areas we could explore with these characters and they now feel very real to me, almost like they're a part of the family. Although any resemblance to my own parents Sandra and Frank Mealey is purely coincidental!!

Sandra and Frank were set to move to Fuengirola. You seem firmly rooted in the UK though. Could you ever imagine moving abroad?

Danny: I've been planning this for years. I'm finally going to see Easter Island. That's the set-up for one of my favourite Simpsons jokes.

Phil: I've always thought about retiring to Switzerland after enjoying visits there over the years. And, if it didn't work out, all is not lost because Dignitas is right there on your doorstep.

You're both involved in shows we wish hadn't ended when they did. Danny: Mongrels shouldn't have been cancelled?

Danny: I do miss Mongrels. It was fun writing swearwords for a puppet fox and a tiny audience. But for every show cancelled too soon, there's at least one that probably shouldn't have been commissioned in the first place, so, on balance, I have no complaints.

Phil, no chance of Early Doors ever returning?

Phil: I loved Early Doors and I'm sure if the BBC asked us, we would do some more. Getting the original cast back together might be a little bit problematic as I don't know what's happened to them now. Last I heard, James McAvoy had turned his back on acting and joined a band called 'the x-men'.

What's next for you both?

Danny: I recently finished my bits of the next series of Horrible Histories. Now working on next year's Not Going Out.

Phil: I wrote a pilot for BBC One with Craig Cash called Broken Biscuits. We're currently in talks to turn it into a series revolving around the hotel that featured. We're also tentatively looking into the possibility of staging Early Doors live, but that's just an idea at the moment.