Stand by your radios! Jeremy Hardy is joined by special guests Gordon Kennedy and Rebecca Front as he examines growing up with reference to Nietzsche, Taggart and big big crayons. 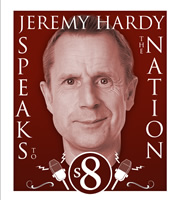 Jeremy Hardy is joined by special guests Gordon Kennedy and Rebecca Front as he examines growing up with reference to Nietzsche, Taggart and big big crayons.

Few can forget where they were eighteen years ago when they first heard "Jeremy Hardy Speaks To The Nation". The show was an immediate smash-hit success, causing pubs to empty on a Saturday night, which was particularly astonishing since the show went out on Thursdays. The Light Entertainment department was besieged, questions were asked in the House and Jeremy Hardy himself became known as the man responsible for the funniest show on radio since Money Box Live with Paul Lewis.

Since that fateful first series, Jeremy went on to win Sony Awards, Writers Guild nominations and a Nobel Prize for Chemistry. He is a much-loved regular on both The News Quiz and I'm Sorry I Haven't A Clue. He can't sing.

His unique world view once lead him to be likened to "an incendiary vicar" - Gillian Reynolds called him "an idealist, a dissenter, a polemicist and moralist - he's a salutary reminder that jokes can, and should, be about big things"-

"Kids should never be fashion slaves, especially in the Far East. My 12-year old daughter asked me for a new pair of trainers. I told her she was old enough to go out and make her own".

"When women carrying babies go begging on the Underground, they get accused of using as them props. Where are they supposed to leave them? The beggars' creche at Oxford Circus?"

"Islam is no weirder than Christianity. Both are just Judaism with the jokes taken out."