Rich is excited that Taskmaster is about to start, look he's even wearing his "costume" but more excited that he has a very exciting exclusive interview with a notable personage. You'll never guess who. Ally is slightly out of joint, but this is a show with everything, including a puppet show from a Victorian ghost, a rejuvenated carrot and a hyperventilating donkey. We cover all the big news, like Elton John's marriage and Union Jack portaloos and which is the best Quality Street. Will wasps ever beat bears? And will Bernie Taupin ever be on Tipping Point? We're just counting down the seconds to Taskmaster, let's face it. 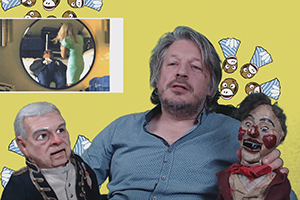 Episode 16 - Tucking My Shirt In

Ally is worried about Prince Andrew moving in on his territory (but can't predict how far he might take that) and tries to take control of the show. The ghost...