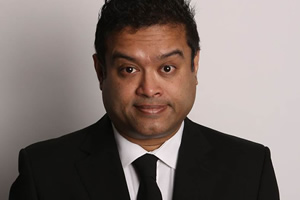 Paul Sinha talks about the Edinburgh Festival, his changing audience demographic, why the recent newspaper reports about his sexuality were rather slow off the mark, and how being a star of ITV's The Chase doesn't automatically mean you win pub quizzes.

Paul Sinha is to host a new panel show in which the questions are about television. Paul Sinha's TV Showdown will start on ITV this winter.

The savvy chaser and former GP vowed not to let the disease dictate his life and said he refused to live in the future, only the present. But Paul, 50, admitted that while his brainpower is still as fast as ever, if it begins to slow he will quit The Chase before they can fire him.

Paul Sinha has shared an amazing drunken video from his wedding as he and husband Olly Levy attempted a duet.

The happy couple are seen with their arms around each other as they sing and sway along to the music, as their friends watch on.

The gameshow star and former GP on how he wrote his 'career best' standup material after getting married - and being diagnosed with Parkinson's.