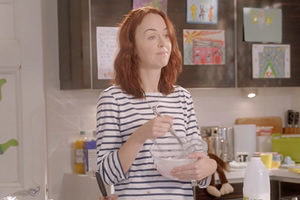 Bad Mother is a new online sitcom on the theme of parenting. Writer Susie Gilmour and star Laura Patch talk about the project in this interview.

Are you a default parent who ends up doing everything?

It's something that actress Laura Patch, who plays the titular character, can understand especially juggling her own career and three young children. "I'm lucky, my husband is self-employed and we parent together. Which is really cool. It's still working especially when it's creative. And you've still got to do everything and give them [the children] a 100 per cent. It's tough."

Filming is under way on Songbird, a new British comedy film about the lead singer of an indie rock band who goes back to university. Cobie Smulders and Jessica Hynes lead the cast.

Alice Lowe, Dolly Wells and Laura Patch will be appearing together in a new film, Black Mountain Poets, planned for release later this yea.