Filming is now under way on Songbird, a new British comedy film.

The movie focuses on the lead singer of once popular 90s indie rock band who goes back to university after her band splits up.

It's been announced that Jack Reacher and Avengers star Cobie Smulders will star in the movie alongside W1A's Jessica Hynes.

The official synopsis for the film is as follows: "Joanne Sykes is the lead singer of once popular 90s indie rock band The Filthy Dukes. They've been on the road since 1996, slowly but surely managing to play 150-capped venues.

"We find the Dukes at their last ever gig, and as the band falls apart so does Joanne; she finds out her boyfriend is cheating on her with just about everyone, and there's little left for her once the group disband.

"So, thinking about the next step, she drunkenly applies for a university place. University isn't quite what Joanne expected - far less wild partying, and a lot more yoga and kale. Whilst there, she falls in love with a librarian called Pete. It's far from smooth sailing, but will be going back to university be the new start she needs; who knows, maybe she'll re-discover her love for music."

Filming is now underway in Cornwall. The production is being overseen by Clarke and Jason Maza, via their production company Unstoppable Entertainment. Their previous films include Scottish Mussel and Hooligan Factory.

Songbird has been written and is being directed by Jamie Adams. This will be his fourth comedy feature film, having previously completed Black Mountain Poets, A Wonderful Christmas Time and Benny & Jolene.

The writer says: "I am incredibly lucky to be working with such a talented cast and crew on Songbird; Cobie Smulders is such an amazing comic actor, and it's truly a privilege to work with her here in Cornwall, of all places!" 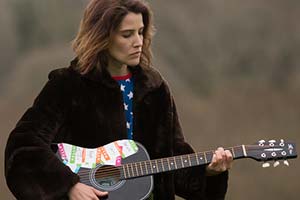