Eight new episodes of the Manchester-based coming-of-age comedy drama will land on iPlayer next month.

But Tallulah Greive has left the show, after the fallout from Lauren's kiss with Yasmine at the end of the first series, with the character now pursuing a job opportunity in London.

Mirroring the show's opening episode, the search is now on for a new flatmate. Will it be Declan, Mel or new character Zak, Craig's cousin, played by Theo Graham (Brief Encounters)? Newcomer Elena Gyasi also joins the cast as Declan's half-sister Tiegan.

Rebecca Atkinson (Shameless) returns as Craig's landlord, as does Jordan Dawes (Drifters) as Craig's boss at the Sportsbowl, Craig 2.

Spun-off from the CBBC series Millie Inbetween, with Grieve, Stevenson and Wisker reprising their roles in an older context, Flatmates was created by Steven Andrew, Gary Parker and Raymond Lau for Zodiak Kids Studios (Secret Life of Boys), and first aired in 2019.

Series 2 is once again directed by Louise Ní Fhiannachta and Dez McCarthy, with Lau producing and Andrew serving as executive producer.

Speaking at the time of the show's commission, Andrews said: "Flatmates represents the significant journey we all make from childhood to adulthood. With a balance of drama and comedy, the show taps perfectly into BBC iPlayer's millennial following and has all the elements we hope will make it a bingeable success".

Series 1 of Flatmates is available now on BBC iPlayer 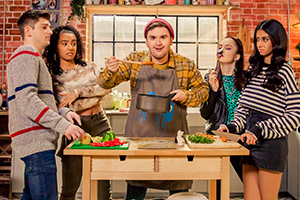