A new sitcom has launched on Amazon Prime Video today.

The series has been written, directed and produced independently by Gary Sinyor, the celebrated filmmaker behind titles such as Stiff Upper Lips, Leon The Pig Farmer and In Your Dreams.

Gary Sinyor says: "I wanted to create a mainstream comedy about a truth-seeking journalist with big ambitions who is limited to hunting down rubbish stories for a small-time paper. Some of the greats of British comedy history show you can laugh both at and with opinionated men frustrated by the challenges of day-to-day living. Paul is clumsy, stubborn and obsessively befuddled by just about everything. As am I."

Tim Downie adds: "Going from playing the arrogant Governor Tyron in Outlander to broad comedy is part of the joy of being an actor. The characters that Gary has created say things that I suspect people would like to say but daren't. It's funny and irreverent with a great deal of charm."

Sinyor quips: "Anyone who doesn't like it is an anti-Semite."

The sitcom is available to buy on Amazon, or at no extra charge for Prime subscribers.

Paul Green (Tim Downie) is an ambitious but hapless journalist working for a very small-minded publisher. He's constantly ambushed by his sister Naomi (Lucy Montgomery) for childcare duties, whilst his Dad Ronnie (Geoff McGivern) is still as competitive as a child. His single friend Simon (Josh Howie) is off the scale neurotic.

A fresh new British sitcom by the man behind Leon The Pig Farmer. 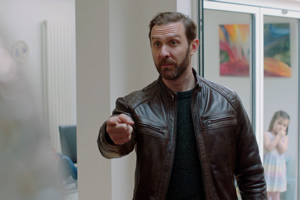