The cast have been revealed for Truth Seekers, Simon Pegg and Nick Frost's new sitcom for Amazon Prime Video.

Filming has just begun on the supernatural comedy series, which will be launched as an Amazon Original in 2020.

The horror comedy follows a team of part-time paranormal investigators who team up to uncover and film ghost sightings across the UK, sharing their adventures on an online channel for all to see.

However, as they stake out haunted churches, underground bunkers and abandoned hospitals with their array of homemade ghost-detecting gizmos, their supernatural experiences "grow more frequent, more terrifying and even deadly, as they begin to uncover a conspiracy that could bring about Armageddon for the entire human race."

It's now been revealed that Samson Kayo will join them to play a character called Elton, Susan Wokoma is taking on the role of Helen, with Morgana Robinson as Janey, and Kevin Eldon as Jack.

A picture has also been released of Might Boosh star Julian Barratt in the role of Dr Peter Toynbee.

Producers say: "Set in a mysterious world filled with dread and just-out-of-sight monsters, Truth Seekers mixes the very funny with the very scary in an exciting take on genre storytelling from the minds that gave us Shaun Of The Dead, Hot Fuzz, Sick Note and Paul." 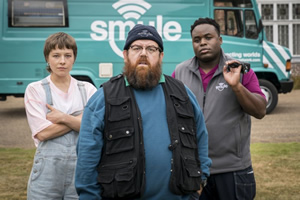