The Chuckle Brothers characters are set to return in new animated pilot ChucklesWorld, if a crowdfunding drive is successful.

Paul Elliott and Barry Elliott starred as The Chuckle Brothers in nearly 300 episodes of BBC sitcom ChuckleVision between 1987 and 2009. Barry died in 2018, however Paul is now looking to keep their characters going via animation. He has launched a page on the Crowdfunder platform called Bringing the Chuckle Brothers back to the screen!.

The page says: "Loved by generations for their countless TV adventures and brilliant theatre shows, The Chuckle Brothers are to return to our screens in ChucklesWorld, a new and hilarious animated series on mainstream television.

"That is really good news for those who grew up laughing at the family-friendly antics of Paul and Barry (as well as our parents and grandparents who loved them too!).

"The infectious hilarity of The Chuckles will live again in this series of brand new adventures but - almost certainly - with the same crazy results.

"Paul Chuckle is masterminding - if that's what you can call it - the return of the Chuckles back to our screens in ChucklesWorld but you too can be a part of it."

The page also explains: "The money raised will be used to commission a special 'first edition' ChucklesWorld animated pilot episode, with both new and original material for Chuckles fans."

Paul says: "So here we are - 'To Me - To You' in a way. Everyone who takes part will get an exclusive chance to see the pilot edition before anyone else and anyone wishing to make a bigger contribution will get some very special and unique thank you goodies personally from me - that you simply can't get anywhere else!"

Below is the video Paul filmed to accompany the pitch: 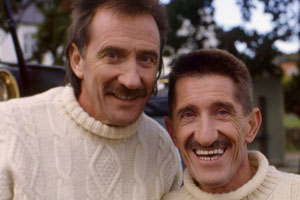