The results of the Malcolm Hardee Awards 2019 have been announced at a ceremony at the Edinburgh Fringe.

The awards - handed out in the memory of comic, agent, manager, club-owner and prankster Malcolm Hardee - celebrate and promote the spirit of madcap, anything-goes comedy anarchy at the Edinburgh Festival.

This year's winners are:

Sketch trio Legs - Julia Masli and The Duncan Brothers - are performing their self-titled sketch show at Just The Tonic at The Caves at 9:05pm. Their brochure blurb explains: "Legs are what most humans stand on. They also allow humans to walk, crouch and lunge. If at any point in your life you have used your legs, thought about legs or if you know someone with legs, then this is the show for you. Legs."

The judges note: "Brilliantly unpredictable. It is the bee's knees of sketch shows. This one will run and run." 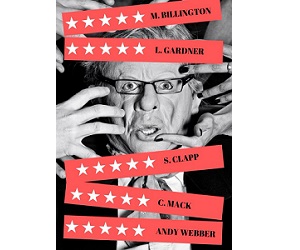 However, the reviewers mentioned are in fact similarly named members of the public he phoned up, who gave permission for their names to be used (e.g. A Webber is Andy Webber, of Bognor Regis).

The judges note the stunt was: "An audacious subversion of the annual quest for the perfect poster quote - even if the people quoted aren't critics."

Act Most Likely to Make a Million Quid

Heading into the festival, Benjamin Bello - who performs stand-up as the character President Obonjo - claimed that BBC Studios and E4 had "stolen his act". BBC Studios is currently working on a TV pilot for E4 called The Colonel Banjoko Show, in which actor Samson Kayo plays a fictional dictator.

Judge Kate Copstick, explaining why this award went to Bello's character, says: "On the basis that, in the aftermath of BBC Studios egregiously riding roughshod over a ten year career by hijacking the presidential character, one of two things can happen:

"1) He rightly gets a massive compensation cheque from the rightly contrite BBC Studios and Channel 4; or 2) Some broadcaster with morals and an appetite for actual originality will offer him a highly successful series of his own."

The awards ceremony took place at The Counting House venue in Edinburgh, hosted by President Obonjo and featuring short sets from a number of acts appearing at the Fringe.

The winners were handed specially made trophies designed by inventor John Ward.